Book review: Ship It Holla Ballas! How a Bunch of 19-Year-Old Dropouts Used the Internet to Become Poker’s Loudest, Craziest and Richest Crew

By Jonathan Grotenstein and Storms Reback 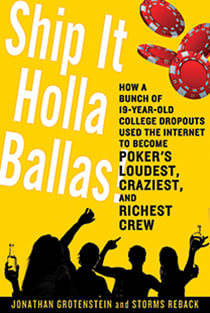 The online poker boom has come and gone for American gamblers—Washington clamped down in 2011—but it lasted long enough for a crew of savvy young couch potatoes to earn small fortunes. What was the point of university when they could watch their bank accounts swell as they played 16 simultaneous games of online poker on four giant computer monitors? Online winnings were not taxed, and online poker admitted them years before casinos would. These young masters studiously learned the mathematics of the game to marginalize luck and earn steady rates of return. Of course, others made their success possible: Montrealer and Cirque du Soleil founder Guy Laliberté makes a notable appearance as the reported loser of $16 million in 2008.

The teenagers featured in the book gamble like pros and behave like fools. You are unlikely to keep reading unless you can endure repeated moronic tales of teenage boys ogling breasts in strip clubs and lavishly spending their winnings on booze and Rolexes, and generally proving there is no correlation between wisdom and the capacity to earn money. Every now and then there is a flicker of self-awareness. After years of vertiginous peaks and troughs, one says, “I think I’m starting to realize that making money isn’t ultimately the highest purpose of life. Money is a means to an end.”

If you can read that without a groan, you may be able to tolerate the sophomoric antics long enough to appreciate the more subtle elements of the book, notably the culture clash between the online champs and the kings of casinos. When the pallid upstarts venture to play in live poker tournaments, they earn the derision of old-timers who honed their skills at actual poker tables where bluffing was more than a matter of clicking a mouse.