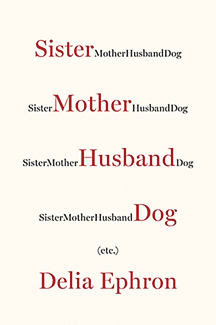 “People with big talent and big fame suck more oxygen out of a room. Those of us who grow up around it or live in proximity have to deal with it,” writes Delia Ephron, little sister to the late great screenwriter-director Nora Ephron in a series of autobiographical essays that are surprisingly unsentimental and generous in detail.

Nora needed to be on top and could be difficult to work with, confesses Delia, who collaborated with her on several projects, including Sleepless in Seattle, for which she did not receive a writing credit. Their working relationship grew more fraught as they both developed more confidence. “Once, I sat down to write a scene and typed two letters—that’s letters, not words—and she said, ‘no.’ I swear this is true, not that you’d doubt it if you knew her.” Sometimes, after Nora bossed Delia around, Delia would come home and try to boss her husband around. “This did not go over well,” she writes.

Nora knew how to intimidate, too. “No one understood the power of silence better than she did,” which, in part, explains Nora’s demand that those closest to her keep quiet about the cancer that slowly killed her.

Nora wasn’t the only Ephron in Delia’s life who demanded secrecy. Her mother, Phoebe, a Hollywood screenwriter, told Delia, “I hope you never write about what happens here.” Her mother was referring to the late-night drunken brawls with her husband. Delia shared a bedroom wall with her mother, whose demented ramblings sounded like the lunatic wife in Jane Eyre except she wasn’t in the attic. “She was on the loose,” writes Delia. She’s at peace with her decision to disclose the goings-on, though. “I believe that having an alcoholic parent is not only something to write about but that there is an obligation to do it. Tell everyone,” she writes. “You might never get past it otherwise.”