From the brick-like Motorola to today's concerns about spying, Elizabeth Woyke's fascinating book traces the history of smartphones 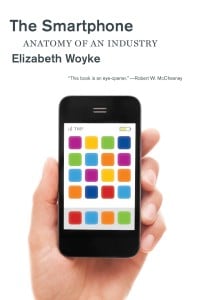 THE SMARTPHONE: ANATOMY OF AN INDUSTRY

The first cellphone prototype, the Motorola DynaTAC, was the approximate size and shape of a loaf of Calabrese bread. By today’s standards, it was a behemoth, but at the time (1973), it looked like a sleek, seductive portent of the future. That moment is where this book begins. Woyke, a veteran technology reporter who has covered the field for both Forbes and Businessweek, aims to trace a history of advanced mobile phones that arcs from that original Motorola brick all the way to Edward Snowden’s NSA revelations, and beyond.

She’s achieved that goal, though The Smartphone feels a bit like two separate, interconnected books. The ﬁrst is a meticulously reported account of the development of the industry on a nuts-and-bolts—or microchips and LCD—level, from the initial dominance of Scandinavian carriers like Nokia and Ericsson through the eventual triumph of Apple and Samsung. She pinpoints the smallest ripples of technological development—the intellectual-property skirmish over the pull-down “windowshade” effect on homescreens, for example, gets special mention.

In the second section, Woyke delves into larger, more nebulous ideas, from radiation-related fears and the role of smartphones in aiding health outreach in the developing world, to the very timely topic of personal privacy. Woyke is at her best when exploring these broader cultural issues, and urgent matters such as the tension around using conflict materials like tungsten and tin—both are known to be controlled by militarized groups in the Democratic Republic of Congo—or the very real concerns around labour practices in the Chinese factories that manufacture smartphone parts. She touches on the infamous Foxconn complex, best known as the subject of Mike Daisey’s factually inaccurate This American Life monologue about Apple, and just one of many plants plagued by worker suicides. Here, Woyke matches her diligent reporting skills with vivid, nuanced language that animates the stories she’s telling.

It’s a shame that energy doesn’t infuse the book’s ﬁrst half. At times, she seems so consumed by industry machinations that she loses sight of the cultural context surrounding smartphones. Even a few kicky anecdotes would help—more on Steve Jobs’s notoriously fastidious personality and process, for example, or an account of how RIM’s Jim Balsillie tried to freeze out the Globe and Mail after some less-than-ﬂattering coverage. Still, The Smartphone is a smart, comprehensive read, and a fascinating deconstruction of the elegant, feature-packed devices people of 2014 simply can’t imagine living without.