Review: Soldier Of Christ: The Life Of Pope Pius XII

By Robert A. Ventresca 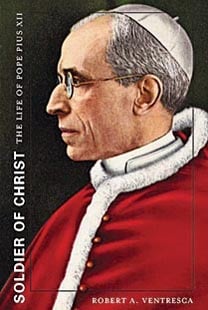 Eugenio Pacelli, who reigned over the Roman Catholic Church from 1939 to 1958, is easily the most controversial pope of the past two centuries. What Ventresca, a historian at the University of Western Ontario, calls the “Pius war” has raged since Rolf Hochhuth’s 1963 play The Deputy excoriated Pius for essentially remaining silent in the face of the Holocaust. That destroyed the pontiff’s once-sterling reputation for having done what he could behind the scenes for persecuted Jews. The bitter debate over whether he did all he could has never really stopped since, fuelled by Pius’s ongoing canonization process. In 2009, Pope Benedict XVI, a German who reveres Pius for his personal Christian virtues and who is appreciative of the fact that Pius deeply admired German culture, declared his predecessor to be venerable, one step removed from beatified status, the final rung before full sainthood.

With the full archive of his pontificate yet to be opened to scholars, so much uncertainty still swirls about Pius that those interested in his wartime record, Jewish and Catholic alike, are troubled by the inexorable canonization process. Despite Ventresca’s dismay at the way the Pius war deflects attention from the two-thirds of an important pontificate—it was Pius who decoupled the Church from colonialism, in part by appointing Third World cardinals—the historian knows his biography will be judged by how he judges Pius during the Holocaust.

The pope does not come off well, particularly not by the standards of our time, when a pope is expected to be a moral conscience as well as a ruler responsible for millions of Catholics caught within sometimes tyrannical political regimes. But Ventresca’s finely contextualized study points out one core aspect of Pius’s thinking that influenced his actions (and non-actions). Contemporary Christians of all stripes have, largely, come to accept that the deep well of religious anti-Semitism fed the Nazis’ racial hatred, but Pius did not. The pope was far from indifferent to individual suffering or to the plight of Europe’s Jews—the war ended with Rome’s monasteries and convents stuffed with Jewish refugees—“but he simply refused to accept the premise of Christian responsibility for Hitler’s crimes.”