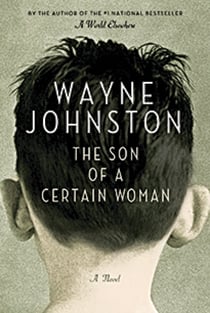 Son of a Certain Woman

Johnston’s ninth novel, his fifth (in a row!) to make the Giller Prize long list, revolves around an atheist lesbian “Black Irish” unwed mother whose son, Percy, has a large port-wine stain on his face and oversized extremities and lips. Unluckily for her, she lives in 1960s Newfoundland, across the street from a Catholic high school.

Besides being the victim of nearly every prejudice possible, Penelope Joyce is also a universal object of lust for young deacons, her chemistry-teacher lodger and his students, the sister of her ex-fiancé, and even Percy, who narrates the book with shameless gusto. In context, it’s hard to blame him for his Oedipus complex; obsessed by sex, he’s a Canuck version of the schlemiels (somewhat lovable inveterate losers) in American Jewish ’60s novels by the likes of Philip Roth and Bruce Jay Friedman. But rather than put Percy in outrageously bizarre situations, Johnston has him grow up to be an adolescent builder of skyscraper-tall tales. “Give me myth or give me death” becomes his motto, and he attempts to distract everyone from his disfigurement by entertaining them.

As Percy’s stories develop what Brother McHugh across the street finds to be a dangerously sacrilegious bent (claiming you’re Jesus’s brother may be funny, but it’s verboten), he attempts to strong-arm the Joyces into toeing the Catholic line. It’s so clear where Johnston’s sympathy lies that he’s shooting cod in a barrel: The sadistic McHugh is an irredeemable bad guy presiding over a religion whose role is seen to be almost wholly repressive. But Penelope saves the day. Instead of the earnest, put-upon heroine we might expect, she’s exuberantly foul-mouthed and erudite, defending her freedom with inspired irony and rapier-like repartee. Apparently inspired by her namesake, James Joyce’s Leopold and Molly Bloom, she says yes while everyone around her tut-tuts.

Johnston has a romantic streak when it comes to Newfoundland—he called his 1998 bestseller The Colony of Unrequited Dreams—and Percy persists in seeing St. John’s as a place that contains multitudes, a city of contradictions. It’s Penelope who puts eros in its erosion.