Spider-man on Broadway: 'When does a work of art become a failure?'

A review of 'Song of Spider-man: The Inside Story of the Most Controversial Musical in Broadway History' 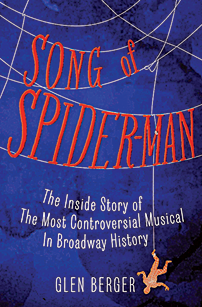 Song of Spider-man: The Inside Story of the Most Controversial Musical in Broadway History

When does a work of art become a failure? That’s the implied question in Berger’s account of his years as co-writer of Spider-Man: Turn Off the Dark, the most infamous Broadway musical of recent years. Berger gives an insider’s perspective of all the stories about the bizarre ideas of co-writer and director Julie Taymor, the stunt work that resulted in injured performers, and the eventual hiring of a new director and writer. But now that Spider-Man has closed on Broadway with losses estimated in the tens of millions, the book is even more valuable as an examination of when, exactly, the show took a wrong turn.

Berger clearly still thinks of Taymor as a genius, even though he admits she could be difficult: Asked to cut some scenes from the second act, she replied, “That isn’t a cut, it’s a mastectomy.” But Berger attaches more of the blame to the critics and gossipers who, he feels, had it in for the expensive musical and gleefully publicized every misstep. A major villain of the book is Michael Riedel, the Broadway columnist whom Berger compares to Spider-Man’s journalistic nemesis, J. Jonah Jameson, for his determination to destroy the show.

And yet the overriding impression is of a show that simply never bothered to address the flaws in its original plan, whether it was Taymor’s insistence on including a mythological goddess character named Arachne, or Bono and the Edge’s inability to write songs that played theatrically (Berger notes the “lyrical wooliness” of even the songs he admires). Berger admits they didn’t give much thought to conceptual problems: “All these years, it was a given that Turn off the Dark would be a hit. There was never talk about whether or not it would succeed on Broadway.”

By the end of the book, with Taymor gone and a new scriptwriter in for rewrites, Berger is reduced to fighting vainly for Taymor’s original vision, while the rest of the team tries to make it less “exceptional.” Though he’s happy when the show manages to please audiences and run a couple of years, he never loses his belief that the show might have had something deeper to say, and neither does Bono, who writes Berger to proclaim himself “extremely worried about the corniness that’s crept into the script.” Of course, writing a musical about a guy in a spider suit and not wanting it to be corny could be the key to its failure.