A chronicler of the quotidian issues her twentieth novel 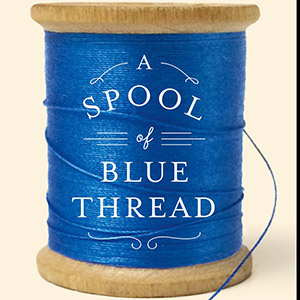 A SPOOL OF BLUE THREAD

The 20th novel from the Pulitzer Prize-winning writer is set, like most of her novels, in Baltimore and, like many of them, it focuses on the dynamics of one family. Here, it’s the Whitshanks (“like most families, they imagined they were special”), specifically, Abby and Red, married for 48 years, and the families of their four adult children. All four are idiosyncratic; one of them, Denny, is especially slippery and unknowable (“Denny was OUT OF AREA. He was UNKNOWN CALLER. There should have been a special display for him: CATCH ME IF YOU CAN”). As for grandchildren, Abby loved them “so much that she felt a kind of hollowness on the inner surface of her arms whenever she looked at them.”

Tyler’s oeuvre has been praised consistently for its multifaceted portrayals of domestic American life. It’s in the quotidian that Tyler tells the stories of her characters, and A Spool of Blue Thread hinges on the not-so-uncommon happenings in the lives of the Whitshanks: sibling rivalries, yearly family beach vacations, experiences of aging. In their 70s, Abby and Red face an uncertain future: Abby is having moments of forgetting, Red has a minor heart attack, and their children fuss about how best to take care of them and what to do about their house. The origin of that home is one of the family’s defining stories; the house, initially built by Red’s father for a wealthier family, is a symbol Tyler uses in the book to build her thoughts around genealogy and, in particular, what it takes to feel safe. It’s a container for the family’s dreams, and its solidity indicates the promise of their “better” life; it isn’t perfect, though, and it can only provide so much shelter from life’s troubles.

Tyler is an expressive writer. When Red’s father makes his life’s quintessential mistake, the scene is “twilight still at that stage where it’s transparent, the fireflies just beginning to turn on and off in the yard”; when Abby goes on an inauspicious walk, “a little mosquito of a chihuahua minced past on the sidewalk”; and, of random people on a bus heading toward hurricane Sandy, Denny observes, “North was where home was, he’d be willing to bet—drawing them irresistibly as if they were migratory birds.” Tyler knits life-defining moments and everyday observances together here in her prose, which is as vivid and comforting as ever.