In a new book, MI5 sets its sights on a writer who has interesting parallels to the author’s life 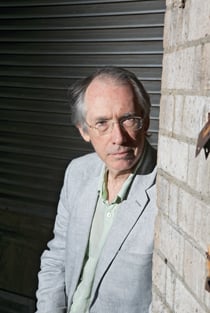 From the patio of the Italian restaurant in London where Ian McEwan has chosen to chat about his new spy novel, Sweet Tooth, one can just about read the blue plaque on a building that declares, “Ian Fleming lived here.” His latest book mentions the James Bond author—but the connection, he insists, is coincidence.

McEwan’s life seems full of happenstance. His blue-grey eyes glinting under his defiantly wispy grey-white hair, he recounts how he had to change the name of Tom Healy, a major character in Sweet Tooth, a lecturer in English at the University of Sussex, when his lawyers discovered an English lecturer at Sussex of the same name.

Shortly thereafter, McEwan was invited to the university (where he graduated with a B.A. in English in 1970) to accept a medal. “I was introduced to Tom Healy, because he was going to give the citation. It was an amazing series of coincidences.”

Some say such unlikely events recall his own novels, which include the Booker Prize-winning Amsterdam (1998), the Second World War novel Atonement (2001, filmed by Joe Wright in 2007), and the unsettlingly comic climate-change tome Solar (2010).

But the 64-year-old author disagrees. Take the 2002 appearance of his long-lost brother David Sharp, a bricklayer, who was given up for adoption at a train station six years before McEwan was born to the same parents. “It seemed to me much more the sort of thing that happens in a Dickens novel than one of mine. I suppose if they’re referring to various high-paced, dark moments, then I’d understand it.”

McEwan’s books are famously rife with jarring incidents of violence—in the late ’70s, he was saddled with the nickname “Ian Macabre”—although his themes have steadily become more universal. In Britain, reporters often call on him to speak about issues such as climate change and euthanasia. Louise Dennys, his Canadian editor, says it’s because of “his willingness to engage with the world—in his own fairly quiet way. He’s not only steadfast; I think he’s enormously courageous.”

When McEwan was awarded the literary Jerusalem Prize in 2011 “for the freedom of the individual in society,” he travelled to Israel to accept the prize in person, despite what he describes as “huge pressure” from writers to editorialists to professors. “I was just shocked that he would go,” says his American editor, Nan Talese, “because it didn’t seem like the kind of thing Ian would do, but in fact what he said was marvellous. He used it as an opportunity to speak out for fairness.”

He donated the $10,000 prize money to a charity through which Israeli and Palestinian combatants speak about the consequences of violence, and retreated to London to write Sweet Tooth. “I came back from Jerusalem and said to myself, ‘I’m now not going to poke my nose into anything at least until this is finished.’ So I stayed out of everyone’s way.”

But McEwan isn’t the kind of writer who’ll just park himself in front of a computer and make everything up. In researching 2005’s Saturday, which details a day in the life of a neurosurgeon, he shadowed a surgeon, and became so knowledgeable he once explained a procedure to two med students in an operating theatre who thought he was a doctor. Solar arose in part from a trip he made to the Arctic to observe the effects of climate change.

For Sweet Tooth, whose narrator, Serena Frome, is recruited into the domestic British intelligence agency MI5 from Cambridge, he quizzed Dennys, who was approached by MI6 (the foreign intelligence service) in 1972. “The last thing you wanted to do, being a total hippie, was be involved,” she says. John le Carré (a.k.a. David Cornwell), who worked for MI5 and MI6, also offered him his observations of the spy process. “I wrote to him and said, ‘Listen, what you told me is so good that surely you want to use it,’ and he said, ‘No no, please have it. It’s yours.’”

In Sweet Tooth, McEwan’s spy, Frome, is assigned to help advance the career of Tom Haley via the work of an ersatz “foundation” set up by the agency because they’ve decided his work is anti-Communist and supports their cause. The idea seems far-fetched, except that there were literary magazines secretly funded by the CIA, including Encounter, to which McEwan contributed a story. At the time, he wasn’t aware it was a propaganda tool, but now he grimaces. “I should have known. I don’t think I got paid, so it didn’t come up. There were many writers who shrugged and said, ‘Fine. We’re in a cultural war, and we’ll get our money from wherever we can get it.’ ”

Haley has other parallels with his author: the stories he writes are subtly changed tales from McEwan’s own 1978 collection,
In Between the Sheets, and a post-apocalyptic novella is derived from an abandoned novel of McEwan’s. “There was a sort of gaminess with that,” McEwan admits, as a waiter sprinkles Parmesan over his ravioli. “And other little thoughts of mine I’ve given to Haley: the way he bridles at Serena’s automatic assumption that Cambridge is a superior place to Sussex, somewhat drawn from my own experience of being turned down at Cambridge because I fluffed the interview.”

Though the plots of earlier works such as The Comfort of Strangers and Black Dogs involve malign forces and characters, the murkiness of Sweet Tooth makes it harder for a reader to assign blame or offer sympathy. “Often in moral systems,” he says, “norms get defined by the immediate behaviour around you, rather than by some abstract principle. Serena does a terrible thing: travels to Brighton, meets a young man, whom she immediately fancies, but immediately starts telling him lies, and yet it’s sort of acceptable within the terms in which she’s operating.”

Perhaps there’s an element of fantasy when McEwan doesn’t make Frome an out-and-out villain: “No beautiful girl ever came into my room and offered me a stipend—maybe I just wished that had happened.” But many years later, in 1994, he was interviewed by the woman he would later marry—Annalena McAfee, who was writing for the Financial Times. “I was six months into a terrible divorce, and she assumed I was a happily married family man—and then I asked her out to dinner a few days later.”

The pair are selling their London house and moving full-time to the country near Oxford, where he will have immediate access to the rural England where he takes long country walks that help generate the ideas for his books. According to Talese, “A lot of [writers of] his generation do put themselves out [there in the public], but I think that the public comes to Ian; I don’t think he searches them out.” Among McEwan’s famed friends and contemporaries are Salman Rushdie, whom he sheltered briefly during the fatwa declared by Iran after the 1988 publication of The Satanic Verses. “I think I would have just headed off to remote northwest Scotland, come back when everyone had forgotten who I was,” McEwan says. “He really did fight his corner, and made it everyone else’s corner.” Then there’s author Martin Amis, who appears briefly as a character in Sweet Tooth. In one episode, Amis reads a hilarious excerpt from his work onstage in Manhattan; Haley follows with a morbid passage and bombs.

After lunch, in a cab on the way to his publisher’s office, McEwan says the scene was based on a reading they did together years ago. “Martin read first, and people were rocking in their seats, and I was going to go and read something pretty dark.” The moderator, Christopher Hitchens, “put his hand on my shoulder and said, ‘No, don’t go on yet—I need to talk them down.’ ”

In Random House’s lobby, McEwan sees a display copy of Sweet Tooth and jokingly asks the receptionist if she’ll move it closer to Fifty Shades of Grey “so some of its sales can rub off on me.” But having sold more than four million books, he is one of the few writers who can restore an avid reader’s faith in the popular potential of “literary” fiction. Part of his success stems from his underrated insight into human psychology and emotion. “I think where he is most powerful is in the intimate moments,” says Canadian novelist Camilla Gibb. “Some of those tensions in intimate relations [between his characters] reflect tensions in the wider world.”

As he prepares to retreat to the country, McEwan affirms that he won’t just hide away: “I want to stay in the current of my friends and family,” he says. “I’m convinced that real happiness is other people.”