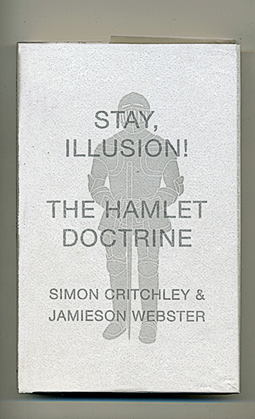 For four centuries, Hamlet has been the limitless work of art of the Western imagination, raising questions in every generation, and influencing far beyond its borders. Two points sum up the play’s reach. The number of people who know at least six words from Hamlet—“to be, or not to be”—must number in the billions, and it’s scarcely possible to imagine psychoanalysis without it. Shakespeare taught Freud everything he needed to know about the Oedipus complex.

So no matter that the authors, a husband-philosopher and wife-psychoanalyst team, are not professional literary scholars, or that some of their ideas (Ophelia as the true tragic heroine of the play) are more puzzling than illuminative, or that the previous commentators whose thoughts they plumb (Hegel, Freud and Nietzsche among them) are outsiders, too: Hamlet always has something to say, however murky, to everyone.

And much of Critchley and Webster’s response is remarkably thought-provoking, all the more so for being rendered in lively, non-academic prose. While they emphasize what is always emphasized—in every era readers feel their particular time is marked by a Hamlet-like gulf between action and thought found precisely in those who think most deeply (as in Yeats’s “the best lack all conviction”)—they explore new angles. The oppressive atmosphere of Elsinore, for one, a police state in which Hamlet and Polonius (the rat behind the arras) are not the only spies—everyone is watched. That echoes the real-life situation that must always have weighed heavily on the ever-cautious Shakespeare, who saw the Elizabethan state kill Christopher Marlowe in “a great reckoning in a little room,” and break another playwright, Thomas Kyd, on the rack. The claustrophobic feel of the play is not all in Hamlet’s fevered mind.

Critchley and Webster note as well how, for a famously indecisive character, Hamlet is one murderous guy when he does get going, responsible for the deaths of Polonius, Rosencrantz and Guildenstern and a fair share of the macabre carnage at the play’s end. “Do we even like him?” they ask. Maybe not, but we love his story.