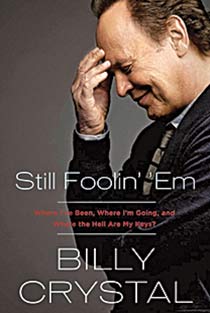 Billy Crystal has conquered TV, movies, stand-up, Broadway and even major-league sports. He’s earned six Emmys, five American Comedy Awards, a Tony and comedy’s most coveted lifetime achievement hallmark, the Mark Twain Prize; and though he’s never scored an Academy Award, he’s hosted the Oscars nine times, a record exceeded only by Bob Hope. He should, by all rights, be considered a superstar. Yet Crystal lacks the larger-than-life mystique of, say, Jerry Lewis or Jerry Seinfeld. Indeed, it is his most appealing quality. He remains show business’s most likeable mensch.

It is that mensch, that multi-talented everyman, who shapes and defines this gently humorous quasi-memoir. Completed soon after his 65th birthday, Still Foolin’ ’Em (its title borrowed from the mantra he whispers before every stage appearance) interlaces Crystal’s autobiography with wittily sage advice and the occasional screed about joining the Social Security set.

Adding to the average Joe image, his personal life has been remarkably unremarkable—no scandals, no skeletons. His was an all-American childhood marred only by the death of his father when Crystal was 15. He’s still happily married to his college sweetheart, 43 years later. Two well-adjusted daughters have given him four grandkids, the most recent born the day he turned 65. He’s even lived in the same house since 1979.

Professionally speaking, Crystal is modestly proud of his accomplishments and candid about his failures. His passion for baseball, particularly the New York Yankees, gets near equal play, and he cites his one-game contract with the team on the eve of his 60th birthday (Pittsburgh Pirates pitcher Paul Maholm struck him out) as the single greatest moment of his career.

A natural storyteller, Crystal peppers the narrative with charming, thoughtful vignettes. It is those sketches—his friendships with childhood heroes Muhammad Ali and Mickey Mantle, his encounters with such colourful characters as Miles Davis and Sammy Davis Jr., his warmly idiosyncratic, substitute-father relationship with his uncle Berns—that ultimately make this such a delightful read.