Stringer: A Reporter's Journey in the Congo 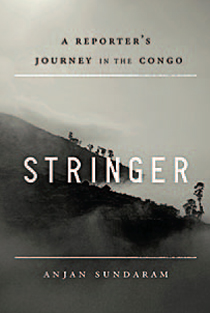 Stringer: A Reporter’s Journey In the Congo

Wonder what it takes to be a foreign correspondent? In the first scene of his book about launching a journalism career in the Congo, Anjan Sundaram answers the question without posing it. A street urchin steals Sundaram’s phone. Sundaram gives heedless chase into the night, through alleys and a field and into a garbage dump, where the thief divulges his first name (“Guy”) and disappears. The next night, Sundaram returns. Guy materializes, sans phone and sans remorse. Sundaram settles instead for a quick friendship, a shared joint and a night-long tour of Kinshasa on Guy’s motorcycle. Persistence, curiosity, and a fundamental openness to lived experience: This is what it takes, and Sundaram has it. His narrative instinct and hoovering senses make him yet another cut above.

Sundaram graduated from Yale University in 2005 as a math whiz with a job offer from Goldman Sachs. Instead, he chose to “immerse” himself in the world as a journalist and headed to the Democratic Republic of the Congo, then in the midst of conflicts claiming millions of lives. He wanted to live a complexity he could not find as a news reader. By the time he eventually left, he felt he had “approached [the Congolese], and possessed some part of their distress.”

The book offers glimpses into the Congo, but mostly, this is a story about a determined amateur making it as a reporter. Sundaram clambers onto the lowest journalistic rung, as a freelance “stringer.” We see him using sources, being used, making fast friends but enjoying only short friendships, always moving, an itinerant storyteller learning his trade. By the time post-election violence engulfs Kinshasa, Sundaram is reporting for the New York Times. All the other foreign correspondents fled; Sundaram was not shrewd enough to plan an escape from probable mobs. Good for him. Though perhaps the great irony is that Sundaram reached the peak of his influence as a reporter while confined to his room in a gated compound. He couldn’t see much of anything, but he listened to the radio and made calls. He was there—or rather, closer than the rest.