'Not just a handbook on how to browbeat kids'

By Joanne Lipman and Melanie Kupchynsky 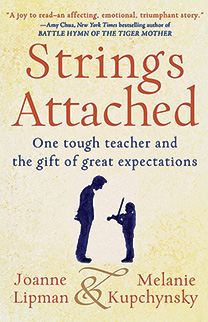 Strings Attached: One Tough Teacher And The Gift Of Great Expectations

By Joanne Lipman and Melanie Kupchynsky

Jerry Kupchynsky, a high school music teacher in East Brunswick, N.J., from 1957 to 1993, would yell at his students, call them names, berate those who made mistakes, and set near-impossible tasks that he expected them all to complete. This book-length homage to him is blurbed by Battle Hymn of the Tiger Mother author Amy Chua, but thankfully it’s not just a handbook on how to browbeat kids. Instead, it puts his methods in context: as those of a man whose life balanced happiness with tragedy, baby-boom optimism with immigrant struggle.

It also serves as a biography of its authors, both of whom were taught by “Mr. K”: Lipman, a teenage violist and later journalist whose 2010 New York Times op-ed was the seed for this book, and Melanie Kupchynsky, a violinist for the Chicago Symphony Orchestra and Jerry’s eldest daughter. Their alternating narratives offer differing perspectives: Lipman’s is that of the middle-class music lover, Melanie’s that of the prodigiously talented, considerably less well-off youngster both helped and constrained by her father’s iron will. For Lipman, Mr. K’s “tyrannical” approach encourages her to be all (and whatever) that she can be. For Melanie, he’s a driven man plagued by medical bills (her mother was wheelchair-bound by multiple sclerosis) and trying to import old-school Eastern European values into a permissive society—while predetermining Melanie’s career path as a music teacher.

Growing up in the ’70s, the authors become friends and partners in a high school string quartet, along with Melanie’s sister, Stephanie. When they graduate, Lipman praises Mr. K for instilling determination that helps her get a job at the Wall Street Journal; Melanie finally finds a way to negotiate her own space. But just as the book threatens to become a self-congratulatory tale of empowerment, it shifts gears: Stephanie disappears, and a devastated Mr. K opens up about his horrific childhood in Stalin-era Ukraines. His demanding outlook is put into context as a symbol of perseverance in a fragile world.

The book concludes with a memorial concert to Mr. K by many of his old students—a tribute to a man whose methods may not have been for everyone, but whose heart was inarguably in the right place.