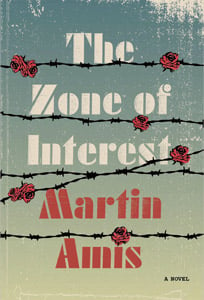 THE ZONE OF INTEREST

When Joseph Heller was asked why he hadn’t written anything as good as his debut, Catch-22, he’d bristle, “Who has?” Martin Amis could say the same about his 1980s and ’90s work. Novels such as Money and London Fields, with their glinting prose and unlikely mixture of hilarity and bleakness, remain as compelling as anything written in late 20th-century Britain. But since his poignant 2000 memoir, Experience, his talent has seemed not so much wasted (despite nasty reviews of 2003’s Yellow Dog) as unmoored. His energy survives, but his resistance to cliché can produce linguistic tics, his state-of-the-world concerns a sometimes uncomfortable strain for significance.

The Zone of Interest, however, is worthy of its considerable ambition. It returns to Auschwitz, the setting of Time’s Arrow (1991), which told the concentration camp’s story in reverse, both lampooning the Nazis and lamenting their victims. The new novel is at once more straightforward and more complex, its realist narrative spread among the voices of three horribly compromised characters. Angelus Thomsen works on the logistics of producing synthetic rubber at the camp’s Buna-Werke; something of an aesthete, he seeks escape through dangerous liaisons—including with the wife of the second narrator, Paul Doll. Self-described as “a glorified bureaucrat,” Doll is a pompous Arsch whose dedication to facts and ﬁgures is undermined by the unhinged mentality of the Third Reich. The third is Szmul Zachariasz, a prisoner who survives by moving and mining the dead bodies of his fellow Jews. The three are drawn together in a plot of backstabbing and sabotage where the personal is inseparable from the political.

Amis explores how humanity might survive in such an extreme environment. With frightful irony, he warps the genres of the office comedy, the romance and the dystopia in a setting whose every unimaginable atrocity is drawn from rigorous research. He works with restraint, his prose embodying his dictum that “style is morality.” Szmul’s defiant, dead-end logic, Doll’s amusing but harrowing blather, and the choked poetry of Thomsen’s gradual awakening together produce an effect similar to Paul Celan’s obsessive, lyrical and haunted Holocaust poem, “Todesfuge,” allusions to which are woven throughout. Amis retains his power to shock—the book has been rejected by his German and French publishers—and his aesthetic power: This is a work on which the reputation of this author, so concerned with posterity, will rest.