Supernatural evil in the White House

Just like future dystopias, horror stories are almost always tales of their times. Andrew Pyper’s forthcoming novel 'The Residence,' explores the presence of a demon within the White House walls. 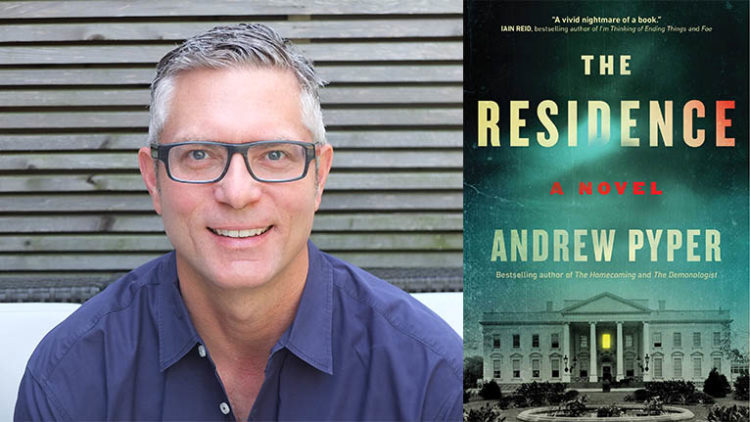 Just like future dystopias, horror stories are almost always tales of their times. It’s no accident that vampires made their fictional splash while thousands of consumption victims were coughing into bloody handkerchiefs, or that enormous monsters arose from the deep when nuclear testing was pulverizing Pacific islands. It’s not surprising, then, that the spectre of Donald Trump hangs over Andrew Pyper’s forthcoming novel The Residence, which turns on the presence of a demon within the White House walls.

That’s inescapable, allows Pyper in an interview about his finely written, metaphor-rich page-turner, and far from wrong, too, even though the American president in his novel is the obscure Franklin Pierce. (In office from 1853 to 1857, and rated by historians as one of the worst presidents ever, Pierce is the only incumbent whose own party refused to nominate him for a second term.) But it was the Pierce family tragedy, not American history, which first inspired The Residence. “I was reading accounts of supernatural occurrences in the White House,” recalls Pyper, when he learned about Franklin and his wife, Jane, who had arrived grief-stricken in Washington from their New Hampshire home. They had lost two of their three sons in early childhood and, just two months before Franklin’s inauguration, their last child, 11-year-old Ben, died before their eyes in a railway accident.

“Jane became the so-called Phantom of the White House, who refused all social events, retreated to her room and corresponded with her dead [third] son, pleading with him to come back to her,” Pyper continues. “According to her letters, he did.” In The Residence, the First Lady, more intelligent, more sensitive and far more acerbic than her husband—she bitterly remembers how right she was to assess him during their courtship as a “true American, a man who would become important by virtue of competent talents combined with exceptional presentation,” a description fit for many a politician—has periods of energy and lucidity. She urges her husband to make the right decision in the real-life case of Anthony Burns, an escaped slave arrested in Boston in 1854. But the president, determined to placate the Southern component of “the very fine people on both sides” of the slavery-abolition divide, effectively put the New England city under martial law long enough to march Burns through a huge crowd of angry supporters to a Virginia-bound ship.

Jane soon descends into deep depression, while under her husband’s leadership the cold American Civil War inches inexorably further along its path to becoming hot. Strange sounds emerge from the White House walls, and silent spirits crowd the mansion’s furnace room. They are the ghosts of the slaves who built “this house”—meaning America itself—explains the enigmatic boiler man, an unruffled conductor on an alternative Underground Railroad, and they’ve “now come home,” presumably to roost. Jane sees visions of the dead yet to come, fallen in their unfamiliar uniforms, and realizes that the demonic voice she heard out of Ben’s mouth seconds after his death—“All the boys will die”—had meant America’s sons, not just hers. And then she finds what she desperately wants to believe is a new baby Ben, one that grows with terrifying speed into a preteen, a simulacrum of both her child and America’s original sin.

Making a horror novel of Jane’s individual grief and pain was only natural for Pyper, 52, a very literary gore master who cites Alice Munro and Stephen King as “my two most-read heroes as a teen.” Despite the fact Munro’s southwestern Ontario fictional terrain is easily as creepy as King’s Maine woods, the two authors are supposed to be incompatible, Pyper laughs, one realistic and the other fantastical. “Yet to me they were on a shared Gothic spectrum of threats, of the corrosive effects of loneliness, the danger of wandering outside your comfort zone.” But the expansion of the Pierces’ story into “an exploration of larger political events, like the groundwork for the Civil War and the ongoing atrocity of slavery, in a haunted house setting” was something new on the author’s part.

That arose from Pyper’s research into Jane and Franklin’s marriage, and the way the latter’s personal failings as a president and husband damaged his wife and his nation. “It electrified me, actually, how the story functioned as a foundational myth, about supernatural evil in the White House itself that has gone on to misdirect the American state by way of its leadership.” In the time of Trump, COVID and George Floyd, adds Pyper, “it doesn’t take a great imagination to get there.” Or to see parallels between Pierce’s era and Trump’s, including events that didn’t unfold until after Pyper had finished writing.

The Northern reaction to Pierce’s vigorous enforcement of the Fugitive Slave Act was an upwelling of anger and anti-slavery fervour among blacks and whites that surprised even its adherents. “We went to bed one night old-fashioned, conservative, compromise Union Whigs and waked up stark mad Abolitionists,” wrote the newly radicalized Boston intellectual Amos Adams Lawrence about a reaction that was a direct ancestor of the massive multiracial protests that took to American streets after Floyd’s May 25 death under the knee of a Minneapolis police officer. The whiplash speed of changing public attitudes has made it “a challenge to catch up to reality,” says Pyper about his new project of turning The Residence into “some sort of hybrid documentary-slash-fictional TV series.” His original concern was that the idea of “literally demonizing the White House” would seem too farfetched for potential media partners. “Now, though, it’s a matter of have we gone far enough?”