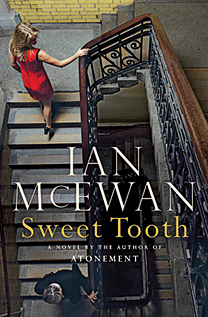 Why become a spy? For Serena Frome (rhymes with plume), narrator of McEwan’s new novel, one reason is: nothing better to do. It is 1972, Serena has just graduated from Cambridge with a mediocre third-class honours degree in maths and she’s a bit at loose ends. Then she meets Tony Canning, a history professor some 30 years her senior, who compliments her student-rag column “What I Read Last Week” (discontinued when she shifted from pithy pieces about modern romances to anti-Communist diatribes inspired by Solzhenitsyn). Being Canning’s lover becomes Serena’s raison d’être, but he has another job in mind for her—officer with MI5, the internal affairs branch of Britain’s secret service. Enthralled by idyllic country weekends, Serena allows Canning to groom her as a “Cold Warrior.”

It is roughly at this early point in the story that McEwan makes it clear none of Serena’s relationships can be taken at face value. Canning abruptly ends their affair, indicting Serena for leaving the silk blouse he gave her in his hamper—something he instructed her to do. A fellow MI5 recruit kisses her passionately but seems to expect intel on Canning in return. Then Serena falls in love with the young novelist she is assigned to bring on to MI5’s payroll. The motive behind this mission—to gain “cultural” traction among left-leaning intellectuals—is unbeknownst to said novelist. Or is it?

Back to that blouse for a moment. Referring to Serena’s ritual laundering of Canning’s gift, readers of an early excerpt in the New Yorker argued, “Silk is not washable.” More importantly, they protested, a young woman living in the heyday of feminism would not have been so easily led by an older man with hair sprouting from the cleft of his chin. But all the spies in this book—male, female, new or retiring—are driven more by love than politics. And just as Serena can’t always trust what she’s told, perhaps the reader shouldn’t either. This is Ian McEwan we’re talking about, after all.