The author takes home $25,000 for his collection of 13 short stories 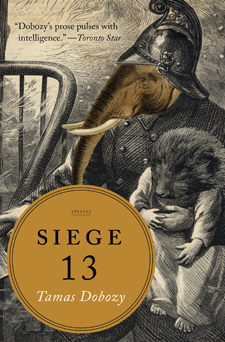 The Writers’ Trust is justifiably proud of the efficiency of its awards night–“six prizes, in and out in an hour,”crowed cheerful host Shelagh Rogers. (And she wasn’t far wrong either.) But it is also frequently surprising, as it was tonight in its choice for its $25,000 fiction prize.

Short -story collections not penned by Alice Munro have traditionally not fared well in the higher reaches of CanLit awards, but the jury (Lynn Coady, Esi Edugyan and Drew Hayden Taylor) gave the nod to Tomas Dobozy’s Siege 13, a lovely set of 13 stories, all linked, however tenuously, to the siege of Nazi-occupied Budapest by the Red Army in the winter of 1944-45.

Dobozy seemed, if anything, more surprised than the audience, and bounded to the podium to say he no remarks prepared, because he “didn’t want to do a Mitt Romney.” So he thanked his wife, children and publishers, and dedicated his win to his father, a survivor of the brutal siege.