The surprising sounds and sides of Tanya Tagaq

The throat singer and author talks about changing attitudes in Canada, communicating without words and why she’s often poking fun at herself 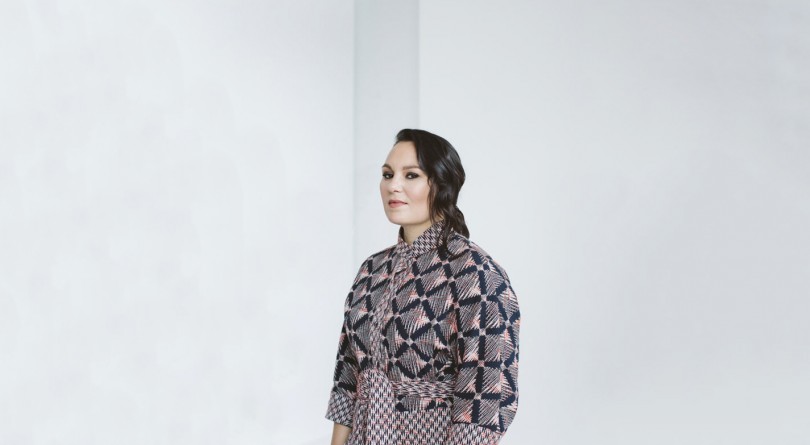 Tanya Tagaq is used to surprising people. When the Nunavut-born throat singer steps onstage, she often smiles and waves demurely—and then produces extraordinary growls, hums and whoops that seem to come from deeper within the human body than anyone else can reach. There was no way, then, that her book-writing debut would yield anything vaguely commonplace.

Split Tooth weaves together poetry, prose and illustrations by Love and Rockets comics artist Jaime Hernandez, and incorporates what Tagaq calls “non-fiction, embellished non-fiction and pure fiction.” It started as scraps of journal entries dating back 20 years, many written while she was touring her music around the world, as Tagaq—who has won both a Juno Award and a Polaris Prize—reflected on her life and the places she grew up. Her writing packs together lyricism, off-the-wall humour and powerful, startling imagery. There are devastating episodes that draw on her own experience in residential school in Yellowknife, and also scenes depicting galvanizing empowerment, as well as supernatural sections drawing on Inuit stories. The audiobook, too, is an unexpected hybrid: Tagaq reads it herself in mellifluous tones, improvising snippets of throat-singing between the segments—she compares them to “little bits of ginger in between the sushi bites.” In the coming months, her record label, Six Shooter, plans a vinyl edition of Tagaq reading the book’s poems—its cover set to be a Hernandez image that was considered too risqué for the book itself.

When Split Tooth came out, it was Tagaq’s turn to be surprised: she says she was “blown away” by its appearance on both Canadian fiction bestseller lists and the Giller Prize longlist. Tagaq, who is now based in Toronto, spoke with Maclean’s about communicating with and without words, and how it’s her “job” to make change.

Q: Given that much of this book was written on your travels, does being somewhere new alter the way you think about the place where you grew up?

A: It depends on my state of mind. At moments, I’m glorifying the North because I can’t stand breathing in car exhaust or seeing another human being. But sometimes, I’ll see things here in the South or in other countries where I feel the system is run in a better way, and then I’ll look negatively upon my home.

Q: The book is far from being a straight-up memoir.

A: I wanted to be able to address the daily issues I have with what happens in Nunavut, pertaining to colonial structure and its historical ramifications, in a way that harnessed an artistry, so that it wasn’t a straight shout-out to criticize. I find that it’s a lot easier to get people on your wavelength if they’re interested in learning, and quite often, people that are interested in art are interested in opening their minds.

Q: You have dedicated your book to missing and murdered Indigenous women and girls—whom you have referenced in your performances as well—and survivors of residential schools.

A: I’m always doing work for a reason: this desperate attempt to alleviate some of the suffering that comes from living under such horrific statistics as an Indigenous person in Canada. It’s a personal thing because I feel the pain from the daily news from home, and from around the country. It’s a way of processing that, but it’s [on] a much more enlarged scale when I think about how art affects the consciousness of society. It feels important on a general level as well. If there’s any way to make change or make anyone safer, then I’m doing my job.

Q: The book is very much concerned with power, on many levels. At times the narrator feels she’s becoming empowered—for instance when she’s pregnant—and then she might feel powerless again.

A: Isn’t it typically cyclical for everyone? Grappling with this idea that you’ve got your shit together and then perpetually having your shit fall apart, and then trying to get it back together? Your shoulders broaden with experience, and you can handle more and more. I’m often giggling about it because I’m a mother, and I’ll remember one of my kids’ ice cream fell out of her cone onto the ground, and she was crying, and I was thinking, “Yeah, that’s how I felt when we were 17 when my boyfriend and I broke up. Those are the same tears.” Quite often, adults will mock children for having emotional reactions to almost frivolous experiences, but [such reactions] seem to continue as people age. Parents are always trying to control their children in ways that will never work out—they don’t have the same experiences that we have. As people get older, they become jaded. I have a beautiful 15-year-old who’s coming into her glorious power right now, and I know better than try to tell her how dark and terrible the Earth is and government systems are, because she’s just learning to not be a small child. How could I possibly expect her to understand the breadth of how shitty Donald Trump is [laughs]? Why would I do that to her?

Q: There are also many references to inhaling and exhaling—both of which generate sound when you’re throat-singing—and to consuming and evacuating.

A: Well, let’s just look at life’s lowest common denominator, which is breath and consuming and rejecting waste. This is how I tend to think as a person on a lot of levels: I’ll look at things in a very small sense and then I’ll blow them up to a very big sense. When it comes to art, I’ve found if you boil things down to greatest common denominators, then everyone will be able to understand. That’s why with music, it was easy for me to remove language, because people are responding to sound, which can carry intent. That’s why interspecies relationships work. Your dog doesn’t understand English; we don’t understand the crows… People can understand body language and sound, so by the removal of language, I found it a lot easier to find common ground with people, and then afterwards, when you have people’s interest, you can start bringing up things like MMIW or Indigenous rights or whatever it is you’re standing by when it comes to art. I’m used to dealing with a sonic or almost subliminal way of communicating. [Writing] a book it was difficult for me, because suddenly, it’s the exact opposite. I felt very vulnerable when this book was released, but I’m feeling a little better about it now.

Q: Did it help that Split Tooth was longlisted for the Giller?

A: What that achieved was I stopped thinking it was just a pile of drivel that came out of my diary. I went, “Oh, I guess it’s kind of OK [laughs].”

Q: Speaking of consumption, some reviewers have written that when you perform, it’s as if you’re being possessed by spirits—rather than, say, that you’re acting. How do you feel about that? I note that early in Split Tooth, the narrator sees a spirit that she has to push away from entering her body through her eyes.

A: All these years performing and knowing what it feels like and what I’m thinking, and having that outside gaze—most often, the colonial gaze—observing and processing my work, I sometimes would scoff at the way people will very readily believe what general society has spoon-fed them. In almost the same breath, they’d reduce something from the “other culture” to something exotic. It’s seen as folklore, and ridiculous. I’m often laughing when people talk to me about shamanism, and sometimes I’ll flip it over: “Well, was Jesus a shaman? So you’re telling me that there’s a dude in the sky who has magic, invisible sperm that knocked up this woman without touching her, and she had a baby, and he died for three days and came back to life?” Everything surrounding Christianity seems completely mythological to me. So when people want to call my art possession or exorcism, or they want to call Inuit belief systems folklore or tokenize them, well, I’m not going to attempt to control that narrative. When it comes to the book, I was giggling. I’m always kind of making fun of myself. When I did the cover [of the Pixies song] “Caribou,” I found it so hilarious that there were these people who have probably never killed a caribou singing about it, and the “Run to the Hills” cover [of Iron Maiden’s song, released in May with F—ed Up vocalist Damian Abraham]—it’s an English band writing about the colonial process, and I’m half-English and half-Inuit, so I’m half-colonizer and half-colonized, covering this English song. It’s hilarious [laughs]! People don’t understand that I’m often poking fun at myself, and with the book, I guess kind of the same thing happened, where even though there’s a baseline of things that have naturally occurred, it was really a huge enjoyment for me to make things up completely. I was anticipating there being questions about what really happened and what didn’t, and I am never going to give a straight answer [laughs].

Q: At one point in the book—which I won’t specify for fear of revealing spoilers—it seems you were having some fun with the idea of “magical sperm”…

A: All I will say is there has never been any Arctic char in my vagina [laughs].”

Q: When Jeremy Dutcher won the Polaris Prize this year for his album Wolastoqiyik Lintuwakonawa, he said, “Canada, you are in the midst of an Indigenous renaissance.” Do you feel that way too?

A: On certain levels. I hate the word “reconciliation” so much. The government has given so much lip service to the idea [of] apologies and feigned respect, and until I see some statistics changing, there is no reconciliation. I feel like we’ve got our feet in some concrete when it comes to how Indigenous people are treated, and it’s been like that for the last couple hundred years. Maybe I’m jaded, and maybe I’m sick of watching people die unnecessarily, and maybe there’s time to do more about it than what’s been done before. When it comes to the idea of there being a renaissance culturally, in a mainstream sense of having more voice and taking up more space, absolutely, yes. I think that a lot of people are starting to understand that the version of Canadian history that’s been provided to them by the group that took over isn’t necessarily the truth, and people are opening their eyes to the very basic human rights issues that are being neglected purposefully by the government. A lot of really great people in Canada are opening their minds to helping Indigenous people be treated as equals by the government. What Jeremy might have been talking about—I can’t speak for him—is that it’s falling out of favour to be a racist asshole. When something falls out of favour, that’s when people start making change happen. But the thought of leaving it to the government—that’s not going to happen. Everyone needs to take it upon themselves to become re-educated, and then everyone needs to make sure they educate their friends, and then we need to spread it like wildfire.