What to get for the Nikola Tesla cultist in your life 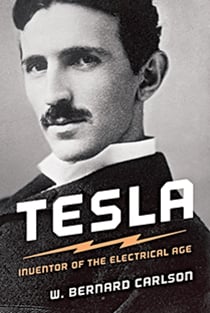 Tesla: Inventor Of The Electrical Age
By W. Bernard Carlson

Run, don’t walk, to buy this book for the Nikola Tesla cultist in your life. Tesla (1856-1943), the Serbian-American inventor who devised and perfected the stator-rotor arrangement in alternating-current motors, is the unsurpassed example of the principle that the journalist’s “first draft of history” can last much longer than it should. With his main contribution to electrical engineering established by the time he was 35, the proud, unpractical Tesla spent the rest of his life imagining increasingly useless projects for power transmission and communications while cultivating friendships with scribblers like Mark Twain.

He died poor and alone, but being good copy made him into a sort of saint. Hack biographers queued for decades to testify that if not for the sinister dealings of Gilded Age potentates, Tesla could have brought cheap energy to the masses and armed the forces of democracy with death beams that would end war. Oh, and he was the actual inventor of radio and X-rays.

The University of Virginia’s Bernard Carlson is not the zingy writer some of his forebears were. But, God bless him, he is the first trained academic historian of technology to approach this topic, and he snaps the intense, romantic Serb back into his proper context. If you want a legitimate rags-to-riches only-in-America story, Tesla’s life is still a fine one. If you are looking for a helpless victim of robber barons, read Carlson’s book and add up the amounts of 19th-century dollars Tesla was given at various times, often with few strings attached, by people like George Westinghouse and J.P. Morgan. If you are looking for the inventor of radio, good old Marconi is still the right place to start, though Tesla has a place in that story. And Carlson doesn’t just debunk the Tesla you already think you know: the light he sheds on the man’s (still very obscure) sexuality ought to be good for a few headlines, too.