Book Review: The Affairs of Others 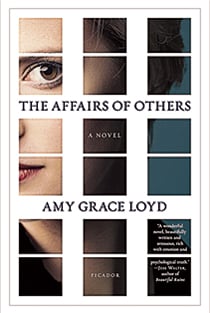 The Affairs Of Others

Loyd has spent years editing short stories by the likes of Joyce Carol Oates, Margaret Atwood and James Ellroy for magazines such as Playboy and Byliner. The subtlety required in bringing out the best in other writers’ work may have helped her with the theme of this splendid debut novel about a grief-stricken, very private woman learning to trust and take comfort, even joy, from her surroundings and peers.

Celia Cassill, still mourning her late husband five years after his death, has taken refuge in the downtown Brooklyn brownstone she bought with the inheritance money. She’s handpicked her tenants to ensure they grant her the solitude she thinks she craves. But when one of them sublets his place to a woman named Hope—on her own after the end of a 25-year marriage—who begins an affair with a man vibrating with violence, Celia’s cloistered world is ripped apart. The collateral damage to her physical sanctuary is one thing, but what Hope’s affair also reveals to Celia is that solitude was just a code word for hiding from the world.

The Affairs of Others is paced like a suspense novel, but while there are dark doings and violent events, the tone is less like a thriller and more like a character study of a woman who thinks she knows herself but is stunned to learn what she is capable of feeling. Loyd’s prose is beautifully controlled, with rich descriptions of Brooklyn neighbourhoods and apartment dwellers. Of the famed Brooklyn Bridge, she comments, “You could fool yourself into believing you were travelling into something unforeseen.” It turns out to be an apt metaphor as Celia’s familiar environs melt away to reveal something new.