Actually, Atlantis has been found several times, but you can’t say that if you’re writing a book about looking for it. 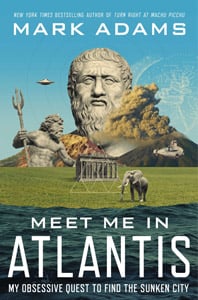 MEET ME IN ATLANTIS

If you only had the Batman comics, would you find New York? That’s the problem with looking for Atlantis, beginning with which parts of Plato’s fourth-hand account you take literally. He describes a city of concentric circles in a landscape near the pillars of Heracles—Gibraltar, probably—that includes man-made earthworks 10 times bigger than the Panama Canal. Then he breaks off mid-sentence. How you translate a word of ancient Greek makes the difference between a convincing argument for locating Atlantis in a national park in Spain or on the island of Malta, and a series of contradictions becomes evidence if you decide that a hieroglyph for 100 was mistranslated into Greek as 1,000. It’s that simple.

Actually, Atlantis has been found several times, but you can’t say that if you’re writing a book about looking for it. You also can’t say that each time it’s found there’s something that doesn’t exactly match Plato’s suspiciously detailed description, and you definitely don’t want to start by saying that if you look for a sophisticated Mediterranean island culture wiped out by natural disaster, there are far too many candidates.

Mark Adams’s ripping tale is part travelogue and part transcript, history happy-hour stuff. It’s pulpy and fast-paced with chapters that end in cliffhangers—definitely something you risk reading in one sitting. Adams stops in real places such as Santorini and Morocco, and imaginary ones such as the continent of Lemuria, invented to explain the presence of lemur fossils in both Madagascar and India. He eats with nutters and skeptics, professors of philosophy and amateur Atlantologists. The cast includes a rabbi in Hartford, a 19th- century German tomb raider and discoverer of Troy, a lieutenant governor of Minnesota, and a psychic from Kentucky whose followers are still diving in the Bahamas according to his directions.

In the end, looking for Atlantis is a story about the feverish draw of human curiosity and the power of preconception in science. In the age of Google Earth, the search for a lost city offers a rare overlap between amateur and professional research; an institute director usually has a crackpot’s latest book on her desk, and there’s an exciting sense that anybody could solve this mystery.

As for the enduring appeal of the myth, as a Spanish park ranger puts it in the book, “No matter how big and powerful you get, you can disappear like that.” You can almost envy the Atlanteans, victims of an angry god, because we know the water that’s coming will be our own fault.