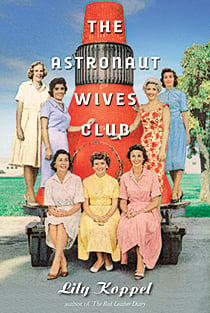 It was no joy ride being married to one of America’s astronauts in the 1960s and 1970s. That’s the theme of Koppel’s new book, which retraces the heady days of the Mercury, Gemini and Apollo missions from the previously ignored perspective of the space wives—stoic women caught in historic circumstances and unprepared for the personal fallout.

At first, being an astrowife was fun. After years of stretching their husbands’ $7,000 salaries on army bases, they got to build dream homes in a Houston suburb dubbed Togethersville. Life magazine paid $70,000 for exclusive access to each family. The swag was fantastic—fur coats, sports cars and tea parties with Jackie Kennedy. Instead of sequestering the astrowives, as the Soviets did, NASA put them on display as icons of modern femininity with kitchens full of Westinghouse electric ranges.

But something was off. The guys were rarely home, choosing to live at Cape Kennedy with their girlfriends, the so-called Cape Cookies. Alan Shepard’s philandering was legendary, even joked about on talk shows. The wives felt it was a patriotic duty to keep their marriages afloat as long as possible. But even with monthly Astronaut Wives Club meetings, they were living lives of quiet desperation, unwilling to broach the taboo subjects of depression, alcoholism and infidelity in case it hurt their husbands’ chances of being selected for a space mission. In one instance, Don Eisele told his wife, Harriet, she was crazy for accusing him of having an affair, but forbade her from seeing a psychiatrist in case NASA found out. He eventually confessed to the affair and she filed for the first “space divorce” in 1968. Only seven couples from the first 30 astronauts stayed married.

This book is thorough and sad. Koppel perfectly captures the astrowives’ disappointments and resentments. If Mad Men hasn’t already leached the last drop of romance out of the 1960s and 1970s, this book will finish the job.