A study of the eternal debate: why do bad things happen to good people? 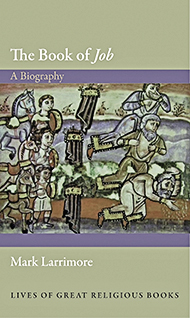 The Book Of Job: A Biography

Princeton University’s excellent series on the lives—meaning the changing interpretations—of great religious books continues with this study of the knottiest of all Biblical texts, a key work in Western culture’s eternal debate over why bad things happen to good people. (Our relative lack of interest in why good things happen to bad people is a whole other topic.) Larrimore, director of the religious studies program at Eugene Lang College in New York City, is subtle and superbly thorough as he navigates his way not just through Jewish, Christian and secular readings but also the uncertainties about the text and the misconceptions that have grown up around it.

The Book of Job is a theological argument in poetry sandwiched between an opening and ending written in prose. It is full of words found nowhere else, and passages of such obscurity that whether or not they have been preserved in the right order is hotly disputed among scholars. Job tells the story of a righteous man, who may or may not be an Israelite, but who is blessed by God in wealth and children. And then God—because of what amounts to a bet with Satan over his servant’s fidelity—kills Job’s seven sons and three daughters, destroys his flocks, and allows Satan to cover Job with painful, disfiguring boils.

Anyone who reads the Book of Job can only marvel at the long-standing proverbial phrase “the patience of Job,” describing a saint-like soul who puts up with travails—at the hands of family, friends, God or circumstances—without complaint. That is emphatically not the man in the Bible, who curses the day he was born and demands answers. So what is the origin of the phrase, first found in the New Testament’s Epistle of James?

Job’s undeserved sorrows have always troubled readers, and long ago prompted the creation of the Testament of Job (known mostly through versions in the Dead Sea Scrolls), which explains and justifies all. In it, Job’s trials—all 48 years of them—are the work of Satan, not God, and Job is sustained by God’s promise that if he just endures, all will be well. In the Bible, Job never learns why he is stricken, he is not bolstered by any promise of eventual relief and when God finally speaks from the whirlwind he stresses his power and majesty, and Job’s pathetically limited human understanding; he does not answer Job’s question, “Why?” (In both versions, as Larrimore points out, Job’s wife suffers more than he does—the children who die are hers, too, but the new ones, those given to Job as reward, are not.)

Religious and secular readers have struggled alike with the text as it has come down to them. As Larrimore shows, medieval Christians, far from chastising Job for railing against his fate, used him in burial rites, where his anguish—“My soul is weary of my life . . . I will speak in the bitterness of my soul”—functions as an everyman’s voice. Catholic apologist G.K. Chesterton thought even God was tempted to atheism by the Book of Job. Like God himself, it offers no definitive answer to the problem of evil.