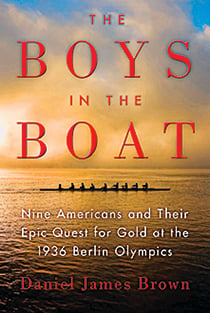 The Boys In The Boat

Those who have had the pleasure to join seven fellow creatures (and a diminutive, mouthy cox) in a rowing racing shell and thereby gained the requisite respect for the harmony, power and balance required to propel a boat forward with grace and speed, are sure to enjoy this chronicle of the American Olympic eights rowing team from 1936. We join a crop of tough, decent Midwesterners in the later days of the Depression who enrolled at University of Washington and were promptly whipped into shape by a now legendary rowing program. The book oozes reverence for the sport. To win, the Americans surrender their egos and master their anaerobic suffering to pursue the “simple, cruel necessity of taking the next stroke.” Non-rowers are far more likely to object to the splashes of purple prose.

Brown situates his boys in the social history of dust-bowl America and the rise of the Nazis. Brown’s attempts to narrate the lads into metaphors can feel clumsy, as when we are told that our Olympic rowers unwittingly transition into symbols of liberty. Jesse Owens did rather better at that. As Brown observes, our eight (white) boys gleefully explored Berlin and were oblivious to the recent Jewish cleansing in the area.

Still, the drama of the crew’s grit and ascendance is undeniable and compelling, and their challenges on the ultimate Olympic stage—including, almost unbelievably, missing the signal that began their gold-medal race—make for a fine sports yarn. This book will surely become required reading for aspiring and nostalgic rowers, and provides plenty of fun for those merely wondering what that little person is doing, facing eight heaving hulks moving as one.