Book Review: The Case of the Maid Who Shot a Massey 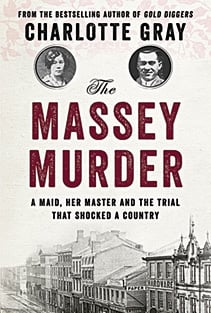 The Massey Murder: A Maid, Her Master and the Trial that Shocked a Century

Gray may be Canada’s pre-eminent historian, but her latest book deals with the modern, just not in the way you might think.

The Massey Murder examines a near century-old slaying that saw the intersection of the beginnings of the events that would mark the modern era, from the First World War to the women’s movement to the growing force of the media. It’s also a captivating read, balancing intense research with richly drawn characters and lively storytelling.

The facts of the case are simple: When Bert Massey approached his house on Walmer Road in up-and-coming Toronto one February night in 1915, he was shot and killed by his 18-year-old maid, Carrie Davies, an English immigrant, with no witnessed immediate provocation. The murder itself probably would have scandalized the city regardless, but since the victim was from the wealthy and powerful Massey clan (of farm machinery and music hall fame), the subsequent court trial became a sensation.

Although Bert was one of the lesser Masseys—he even held a job as a car salesman—the Massey family attempted to get Davies found unfit to stand trial, to avoid public airing of their laundry. They failed, and Davies’s trial, then, represented a chance for the working classes, and in particular, young women in precarious, intimate jobs like service, to see justice done and meted out by their peers. The right for women to vote federally was still three years away, but the seeds of the social consciousness that would lead to widespread suffragette protests were being sown.

Meanwhile, the newspapers ate it up. Rivals the Evening Telegram and the Toronto Daily Star launched a mini-war in their coverage of the case, with the Telegram even raising money to help pay for Davies’s legal fees. Of course, this isn’t the only war Gray documents: Brutal descriptions of the battle in Europe start every chapter and remind readers of what the average Canadian was living through as well as hint at the remarkable national transformation that was to come.

In many ways, The Massey Murder isn’t just about the trial of Carrie Davies but that of Toronto’s status quo, and indeed, the nation.