REVIEW: The Castrato and His Wife 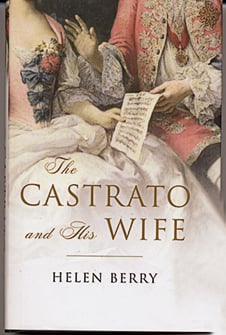 Mozart composed for him, and Gainsborough twice painted his portrait. Giusto Tenducci (1736 to 1790), an opera singer with a rock-star-level female following, was famous even before his notorious scandal. He eloped, at 30, with his singing pupil Dorothea Maunsell, the 15-year-old child of a prominent Dublin barrister. That, of course, was bad enough in itself. But Tenducci was no ordinary tutor.

He was a castrato, subjected as a boy to a dangerous, illegal but tolerated operation to remove his testicles to preserve his prepubescent voice. And therein lies Tenducci’s final claim to fame: when Dorothea, nine years after their wedding, wished to marry another man, she launched an annulment claim that became one of the celebrity lawsuits of the age. Berry, a historian at Britain’s Newcastle University, turns all these events into a fascinating exploration of 18th-century concepts of sex and procreation, love and marriage.

Castratos, who were also outwardly recognizable (because their lack of testosterone meant their bone joints did not harden, allowing their limb and rib bones to grow unusually long), were the stuff of prurient fantasy. Famous for rumoured affairs with noble ladies desirous of infertile lovers—an exaggeration at best, given castrati’s low sex drives—the singers were also mercilessly mocked for their appearance and their maimed masculinity. Catholic to boot, Tenducci was never going to be a welcome son-in-law for Dorothea’s stoutly Protestant father.

Despite marrying, the pair were subject to ferocious persecution by lawyer Maunsell, who had Tenducci repeatedly thrown in jail and threatened his daughter with being sent to a madhouse. The couple persevered, though, and their marriage was grudgingly accepted. But consummation was—probably—never in the cards, and Dorothea later fell in love with a younger man. Her remarkable annulment proceedings, bankrolled by her father, took depositions in Florence. There, the son and assistant of the hog butcher hired by Tenducci’s poor parents to castrate their son described the operation—one of the few recorded glimpses into a practice barely comprehensible today.