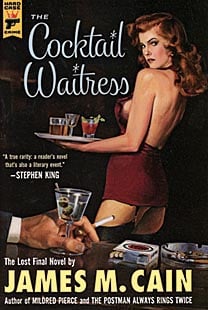 “Faugh!  Everything he touches smells like a billygoat. He is every kind of writer I detest, a faux naïf, a Proust in greasy overalls, a dirty little boy with a piece of chalk,” Raymond Chandler once ranted about James Cain. (Philip Marlowe’s creator was generally unaware that his own Puritan psyche was on display whenever he wrote about anything sexual, although to be fair, Chandler did conclude his 1942 Cain diatribe with, “Do I, for God’s sake, sound like that?”) What sparked the outburst was the way critics, then and now, include Cain with Chandler and Sam Spade creator Dashiell Hammett in noir fiction’s holy trinity.

And Chandler, in his own fashion, was right about Cain, best remembered today for the classic film versions of his novels, including Double Indemnity (1936). Cain didn’t truly belong with the other two authors—his plots were tighter, his sympathy for the women in them far higher, and there was no detective, idealistic or cynical, cleaning up the mean streets of his fictional universe. Instead there were financially and sexually needy men—“sweaty,” one critic called them—embroiled with femme fatales, and denouements predictable in their calamity but surprising in their details. Consider The Cocktail Waitress, Cain’s last, and until very recently, lost novel.

Cain was 83 and ill—he would die two years later—when he began the novel in 1975, although he set it in 1962, for reasons that become apparent only on the final page. Joan Medford, the woman at the core of the story, narrates. On the day she buries her abusive husband after a drunken car crash, Joan meets the two men who will dominate her future: one old, repulsive and rich; the other young, handsome and penniless. The outline is clear enough, but plot twists, the question of how much trust to place in Joan’s guileless account—and an ending that delivers, in noir-speak, a kick to the reader’s solar plexus—make for vintage Cain. They ought to make a movie of it.