The cult of Keller 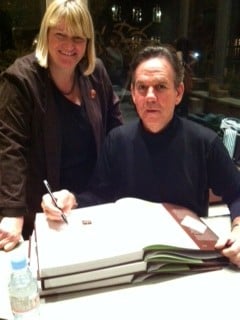 In the swirl of superstorm Sandy, some 500 people turned out to see chef Thomas Keller at the Isabel Bader Theatre in Toronto this week.

The celebrity chef and author was in town for an engagement with The Cookbook Store’s Allison Fryer.

“He’s Hurricane Keller,” she said after noting that he’d just signed 700 copies of his new cookbook.

The audience, a near-perfect split between men and women, young and old, cradled their copies of the 6.5 lb. Bouchon Bakery cookbook like babies on their laps.

The woman to my right had never dined at any of Keller’s six restaurants or six bakeries, but seemed eager to get to The French Laundry. “I saw him on a Cook’s Tour with Anthony Bourdain,” she explained. “I am mesmerized by that level of artistry.” On this night it was her dream to meet Keller. She imagined that while autographing her book he’d invite her to intern at the French Laundry for a month. “I’d even take a weekend,” she said.

To my left was a woman who’d eaten at the Bouchon Bakery at 30 Rockefeller Center in New York. “I really didn’t know who Thomas Keller was, per se,” she said. “But I thought a night out would be nice.”

Keller appeared on stage just after 7 p.m., all in black, save for an unknotted green-and-white striped scarf around his neck.

Fryer listed her guest’s achievements, which include three Michelin Stars and consultanting credits on the film Ratatouille. Keller took a minute to remind the audience that he’s no pastry chef. He insists accolades should be directed at his co-author Sebastien Rouxe, executive pastry chef for the Thomas Keller Restaurant Group.

Fryer asked the audience for a show of hands: How many work in the food industry? (Easily half.)  How many have been to one of Keller’s restaurants and bakeries spread across New York, Las Vegas, Beverly Hills and Yountville, Ca.? (Seventy per cent.)

Fryer noted that since the publication of French Laundry in 1999, Keller’s cookbooks have become increasingly personal. You don’t just want to bake from Bouchon Bakery, you want to read it. Keller said his latest effort is particularly personal because baking is often bound up with memories. He grew up in a large family with five older brothers and an older sister. In fact, the first recipe in the book — a four-ingredient gem for pecan sandies — is dedicated to his mom. 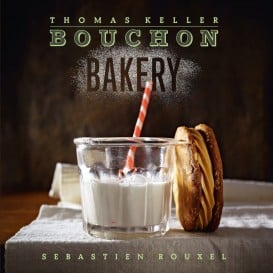 Some of the recipes in the book run four pages. Keller’s advice? “Start with the simplest, easiest recipe.” The chocolate chip cookies, for example, feature 10 ingredients.

Asked about his influence on the industry, Keller said he doesn’t think about it. But he paused at the notion of someone opening a wrapped copy of The French Laundry from under the Christmas tree. “You feel blessed,” he said. “It changes the way you think about what your responsibilities are.”

He had plenty of advice for the chefs in the audience. First and foremost, practise. And then? Practise some more. He urged the masters to mentor.

He confessed he only had two weeks of training. “You don’t say to a kid, I’m taking those training wheels off your bike in two weeks and if you crash and fall, well, that’s your fault.”

Commitment is key, he said. “You have to do whatever you believe in,” he said. “I failed at two restaurants–French Laundry was my third–but I always knew I could get it right.”

Although customers are the bread and butter of any restaurant, Keller isn’t cooking for them. “I stopped cooking for my guests 30 years ago because I didn’t know who they were,” he said. “I started cooking what I wanted — that’s what you want me to do.”

With Keller’s voice raspy and dry, Fryer kept the audience questions short. Someone asked about the culture of a Keller restaurant. “You’d have to ask one of my employees.” He has more than 1,000, all of whom have health insurance. At The French Laundry and per se, staff get 32 days of paid vacation every year.

Someone asked about the foie gras ban in California. “We don’t serve foie gras [now],” he said.

As he explained, PETA goes after the weak link — “the one farm in America that produces foie gras, who don’t have enough money to fight PETA, and they get a bill passed to ban it. How come they’re not after factory farmers who aren’t producing quality [meat]? Because they can’t.”

Supporters of the ban on foie gras always ask How would it feel to have a feeding tube stuck down your throat? “Well, we’d gag,” says Keller. “But the geese don’t.”