The Deserters: A Hidden History Of World War II 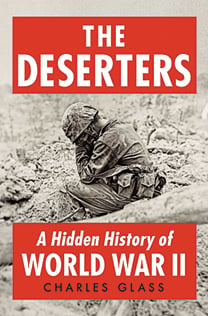 The Deserters: A Hidden History Of World War II
by Charles Glass

It sometimes seems like there is little, in the boundless annals of the Second World War, that remains untouched by the historian. In The Deserters, former ABC News correspondent Glass presents a wartime subject that, at the very least, deserves a dusting off: the 50,000 American and 100,000 British soldiers who deserted from the Armed Forces.

Glass tells the tale of three of them. One is John Vernon Bain, a working-class Brit—a boxer and a poet—who fled his unit after watching fellow soldiers loot casualties on the battlefield. The second is Alfred Whitehead, a farm boy from Tennessee who abandoned his sentry post after surviving Normandy—and later became a gangster in post-liberation Paris. The last is Pte. Steve Weiss, who signed up in Brooklyn at the age of 17, and whose pre-desertion career included a Bronze Star and a stint in the French Resistance.

All three stories are filled in with archival gems and research on the psychology of battle. Particularly harrowing are descriptions of the young deserters’ treatment in British and American military prisoners. After his desertion and capture, Bain spends six months in the notorious Mustafa detention barracks, where he is subject to crushing beatings, starvation, and humiliation at the hands of his own countrymen.

The entire story moves along at a clip, guided by Glass’s elegant prose. But it is, indeed, a book of boys and bullets and battle. Disappointingly absent is discussion of the home front: the families who sent off sons and received home “traitors.”

In a recent interview in The Economist, Glass wondered if his work might provoke some contemporary introspection: “The British gave deserters an amnesty in 1953, but America never has. Theoretically, [American] deserters who are still missing are still wanted. I was keen to do some comparisons of Second World War desertion rates with Iraq and Afghanistan but the ministry of defence won’t tell me, or anyone else, how many deserters there are. From that point of view, it is still taboo.”