The dynasty that gave us Paris Hilton

A review of 'The Hiltons: The True Story of an American Dyanasty' by J. Randy Taraborrelli 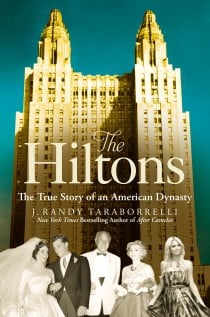 THE HILTONS: THE TRUE STORY OF AN AMERICAN DYNASTY

There are, at present, five Hilton hotel properties in and around Paris, yet the best-known Paris Hilton remains the Los Angeleno celebutante, singularly skilled at the art of being famous simply for being famous. Paris, a fourth-generation Hilton, is among five family members assembled on the cover of Taraborrelli’s history of the innkeeper clan. That Elizabeth Taylor and Zsa Zsa Gabor are also featured, alongside patriarch Conrad Hilton and eldest son Nicky (Conrad Nicholson Hilton Jr.), speaks volumes about the tale Taraborrelli weaves.

Taylor and Gabor were Hiltons by marriage. The unions—Taylor, her first of eight, to Nicky in the early 1950s, and Gabor, her second of nine, to Conrad a decade earlier—were extremely brief, yet both women loom large in these pages. Taraborrelli, a skilled celebrity observer with nearly a dozen showbiz biographies to his credit, clearly recognizes the need for such colourfully outsized characters, including Paris, to add verve and vibrancy to what is otherwise a rather lacklustre tale of steady, strategic empire building. Not that the rise, near fall (thanks to an ill-fated partnership with TWA in the mid-1960s) and ultimate world domination of the Hilton brand isn’t dutifully detailed. As always, Taraborrelli is painstaking in his attention to detail. But in Conrad he is stuck with a rather grey protagonist: unquestionably brilliant, eminently decent, laudably philanthropic and fervently religious, but lacking the vivacity of, say, a Steve Jobs or fellow hotelier Donald Trump. Barron Hilton, Conrad’s second son who assumed the corporate reins and emerged an even savvier businessman than his old man, seems near-equally drab.

Fortunately for Taraborrelli there is also black sheep Nicky, whose hard-partying, skirt-chasing shenanigans and seemingly unquenchable lust for starlets—Natalie Wood and Joan Collins were also among his conquests—significantly enliven the hefty tome’s middle section. (Nick’s premature death in 1969, at age 42, is hardly surprising.) Francesca Hilton, Conrad and Zsa Zsa’s only child, subsequently adds dramatic fuel when, her paternity widely questioned, she unsuccessfully challenges her father’s will. It is, however, the insatiably flamboyant Zsa Zsa who fans the flames, risking perjury by boldly insisting Francesca was the result of rape, occurring inside Manhattan’s Hilton-owned Waldorf-Astoria, by her then-estranged husband.

Ultimately, Conrad does exhibit one interesting quirk. Adamantly opposed to his offspring (or their offspring) inheriting great wealth, he leaves the bulk of his estate to charity. Consequently, Barron and his granddaughter Paris prove chips off the paterfamilias block, cleverly amassing vast fortunes on their own.