The echoes and rattles of lyrical literature 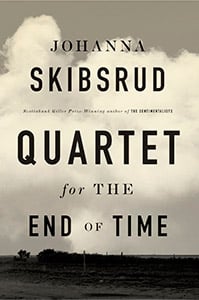 QUARTET FOR THE END OF TIME

There is a moment midway through this novel in which 12-year-old Douglas Sinclair wakes up to birdsong in a Bonus Army camp outside Washington. “He closed his eyes and tried to hear each sound as it had first occurred, when each was still alone, independent of any other.” Douglas himself is very much alone: His father, Arthur, has just disappeared following the July 1932 riots that broke out on the National Mall when police moved to raid the camps of vets demanding compensation for their service in the Great War. Douglas now travels with the Bonus Army, a boy among men, his father’s service papers painstakingly guarded in his front pocket.

His musings reverberate later in the book during Skibsrud’s fictionalized account of how the real-life Quartet for the End of Time came to be written in a Nazi POW camp. The French composer Olivier Messiaen describes the “racket”—rattling trains, the language of birds—that inspired his work. “Everything—when the ear is trained to hear it—is free; everything is noise, and finally, everything is music!” It is one of many subtle and very beautiful echoes Skibsrud has planted throughout the book, which both bind together her disparate characters and illuminate the weighty themes with which she is grappling.

This is at once a sweeping tale and a deeply layered meditation on the nature of time, justice and agency. The narrative moves back and forth, from the U.S. in the ’30s, to post-revolutionary Russia, to Europe in the ’40s, with lengthy detours into the minds of Douglas and Arthur and also of Sutton and Alden Kelly, the privileged siblings who befriend and then betray the father and son. At times, the prose becomes convoluted; thoughts interrupt thoughts, and sentences abound with commas, dashes and parentheses to accommodate so many asides. But it is clear that this is a unique work of literature; Skibsrud, whose debut novel, The Sentimentalists, won the Giller prize in 2010, has embedded meaning in terrific turns of plot. And her rendering of the smallest details can be crystalline: Douglas, aboard a train, studies the faces of his companions in the boxcar, “briefly illuminated in the moonlight, which came in, in fits and starts, through the gaping door.” He wonders how God cannot see them, too—their hunger and desperation and loneliness—given the moonlight, “which he himself thought to throw on them.”