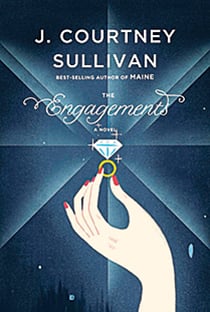 The institution of marriage slots perfectly into an old Borscht Belt-era joke: for every two people, there are three opinions. In her latest commercial confection, after earlier bestsellers Commencement and Maine, Sullivan shines a light on the political, social and economic ramifications of marriage using as a frame an advertising campaign that told women and men a diamond was truly forever.

We’re introduced to Frances Gerety, a pioneering advertising copywriter who, in the wee hours of a post-Second World War morning, conceives of the signature slogan that catapults de Beers, the South African-based company with a cast-iron monopoly on the multi-carat rocks, into public consciousness. Sullivan then interweaves the stories of four couples and their relationships with each other and with diamonds. Evelyn and Gerald, in 1970, are still bound by the loss of her first husband (and his best friend) but frayed by the marital misbehaviour of their only son. James and Sheila, in the 1980s, can’t quite rise above his inability to make a proper living. Delphine, in 2003, sacrifices her marriage for a younger, more exciting man, and gets more than she bargained for. And Kate, in 2012, is happily cohabiting with her partner, Dan, even when the rest of her family can’t understand why they don’t just marry already. Copywriter Frances for her part consumes herself in work and changes lives, but at great personal cost.

Sullivan has written another sure seller to catch fire at the beach, but she’s also provoked thought about the complexities of marriage—and how diamonds are rooted in our unconscious desire for something to signify the deepest commitment possible.