REVIEW: The Final Leap: Suicide On the Golden Gate Bridge 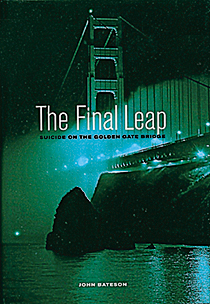 When the City of Toronto installed a suicide barrier at the Prince Edward Viaduct, the bridge went from being the world’s second-deadliest suicide site, with almost 500 fatal jumps since 1918, to none at all.

Such success stories cause Bateson to seethe. The head of a Bay-area suicide-prevention centre, he has written the first book ever published about the world’s No. 1 deadliest suicide site, the Golden Gate Bridge, where 1,500 people have died jumping since 1937. What makes him angry is efforts to erect a barrier there stretch back almost to its first confirmed suicide: Harold Wobber, a First World War vet who, weeks after it opened, walked halfway across and told someone: “This is as far as I go.” Seventy years later, there’s still no barrier.

The drop is 25 storeys, a distance jumpers traverse in four seconds. The odds of surviving are “roughly the same as surviving a gunshot to your head,” Bateson writes, meaning some jumpers don’t die immediately. “Upon hitting the water their bones shatter, their body organs burst, they plunge deep beneath the surface, and ultimately they drown.” (In rare cases survivors live much longer.)

The mysteries abound: the doctor who jumps despite the surprise party he’s planned for his fiancée; a man whose suicide note reads: “Do not notify my mother. She has a heart condition”; “Absolutely no reason except I have a toothache,” reads another. One man holds his hat to his head as he plummets; another jumps in front of a troop of Girl Scouts. Then there’s the Rev. Jim Jones rallying for a suicide barrier in 1977, months before the Jonestown Kool-Aid tragedy.

Bateson notes the bridge is the only landmark of its kind without a barrier—the Eiffel Tower, Sydney Harbour Bridge and the Empire State Building have all been equipped. Yet its governing body hesitates, largely, it seems, because they fear a barrier will be ugly, expensive, and that people will kill themselves some other way.

Yet Bateson believes the Golden Gate Bridge exerts a powerful force—“a fatal lure.” The father of a jumper tells him it “fosters the myth of the perfect death.” A barrier wouldn’t divert these deaths, he argues; it would stop many completely.