The audio book giant is launching its first Canadian-focussed site. Don Katz on why everyone from book lovers to actors should be happy. 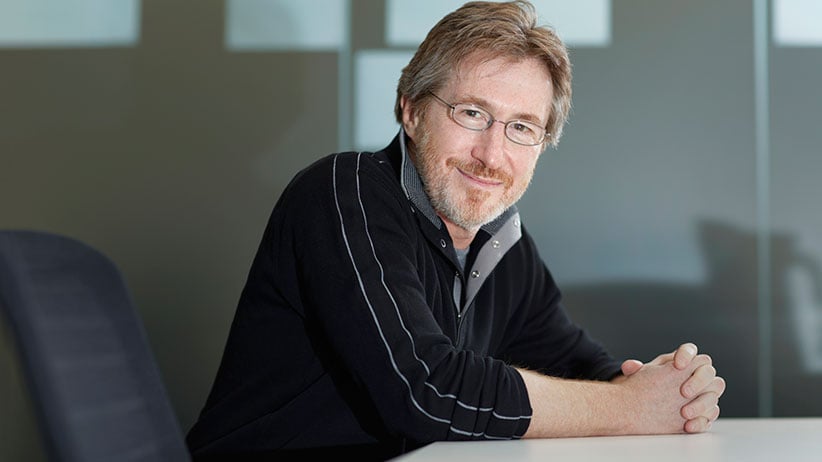 Don Katz, founder and CEO of Audible, Inc., a digital audio book company which became a subsidiary of Amazon.com in 2008. Katz was previously a journalist and author for twenty years, writing five books and serving as contributing editor at Rolling Stone. (Teri Pengilley)

Don Katz—inventor of the first digital audio player, founder and still CEO of Audible (now Amazon’s audiobook arm), former bestselling nonfiction writer, serious hockey fan and apostle of oral culture—is set to sweep into Toronto’s Union Station on Wednesday morning. He’ll bring with him Margaret Atwood and Elizabeth Moss, star of the TV version of Atwood’s 1985 novel, The Handmaid’s Tale, and Audible.ca. The new platform, says Katz, means the instant availability of 350,000 titles, a price break for Canadians (who can now use their own currency), increased profits for Canadian publishers and authors, a free download of Claire Dane’s recording of The Handmaid’s Tale (for a month), a $12-million investment in recording Canadian stories, and a whole lot of work for Canadian actors. Earlier Katz, 65, spoke of how audio’s day has come, or rather returned, in a time-crunched world—and how print’s days of privilege are fading before our eyes.

Q: What does Audible’s expansion into Canada mean?

A: We are already here in the sense that we’re everywhere—customers in every country in the world in 37 languages. No, 38, we just added one. But this is the first time that we’ve actually created a Canadian site focused on Canadian customers. They can now switch over to Audible.ca and get that just price break, they can see how localized our sites are. I just finished telling publishers here that if 60, 70, 80 percent of their lists are not covered in 18 months, we will come back up and make that happen. We just joined Scotiabank as a sponsor of the Giller prize; as I told Elana Rabinovitch what her family has done there is fantastic and now, when you announce the next winner, you’ll have a site that can go really deep into the character of the book and the background of the author. And expect to see Canadian actors making a bunch more money.

Q: I have seen you quoted as saying you’re the biggest employer of actors in New York. You stand by that?

A: What happened was that we began as an invention company and launched the first audio digital player in 1997. I was responding to a lot of the challenges I had as a writer on 13-city book tours in terms of distribution and the cost of books. We began to hook people on listening, habituate them to listening to a massive numbers of books they couldn’t literally read during the times of the day their eyes were busy—driving, exercising, and so on. Now they could. But we depended on the traditional producers of audiobooks, which are mostly publishers, but they couldn’t keep up with our growth. We decided we had to become a producer despite the usual church and state division—one makes, one sells—because we could not let our mystery fans run out of mysteries and quit Audible. We hired some of the greatest actors in the world, who immediately showed why they’re considered the greatest actors in the world. Why wouldn’t you want to hear Colin Firth or Nicole Kidman or Scarlett Johansson read you a story while you’re driving to work? So we began to produce ourselves. It all led to a New York Times story saying that we were the largest employer of actors in the area and pointing out that a lot of these actors were making six figures.

Q: So Canadian actors can open their eyes wide at this prospect too? You’ll be making recordings here with Canadian literature?

A: Absolutely. We were just talking with guys from Ryerson, to make sure we can source young actors at the beginning of their careers, the way we began training actors at Juilliard, in London, at UCLA, USC and Yale. We’re going to be spending $12 million on new Canadian programming in the next three years. We have over 150 new titles or titles coming from Barbara Gowdy and from Margaret Atwood—an Alias Grace, a multi-voice new script of Angel Catbird, Catherine Leroux, Justin Trudeau. We launched the Audible Creation Exchange just for Canadians recently and there are already 500 actors working in that. We want to honour the voice of the nation. Speaking as somebody whose life was almost changed by [Robertson Davies’] Deptford Trilogy when I was in high school, who’s spent a whole lot of time in Canada—I was born in Chicago and from seven to 12 I was one of the best players in Illinois, which meant that at the age of 11 I was getting my ass kicked in Thunder Bay by Canadians—this is exciting.

READ: Margaret Atwood: Audible is a return to an old form of storytelling

Q: The audio business is booming, no pun intended—the stats indicate a 31 per cent jump in titles in 2016 over 2015—and the busyness of modern lives has to be the main reason, with a nod to aging boomer eyesight. In which case, the land of Highway 401 gridlock welcomes you. But there’s more to it in your opinion?

A: Mostly it’s time. A lot of people are driving to work listening to self-help gurus or comedy, and there’s a whole group that are just using all this time sitting in traffic to become more educated and get a leg up on the guy in the next cubicle. And time has a lot to do with the sustainability of the professional creative class. It just does. But you’re right, it’s more than just time to spare. Choice continues to increase a world filled with alternative experiences that didn’t exist before that would keep people away from supporting writers. That makes the two hours per day on average we get from our customers pretty impressive when media observers think an hour of television a day is as sticky as it gets now. Our average customer listens to 17 books a year, which is 12 more than busy people read, according to surveys.

Q: So why? And how do you split your listening and reading time?

A: I would say 85 percent listening. I was a literary nonfiction writer for 20 years, shortlisted for big awards. I want my nonfiction reading—if there’s something intense going on or it’s really high-level, philosophical or something—on paper because I tend to stick with marking up books because that was my training. But for everything else, listening delivers a double whammy. It’s not just utilitarian—I exercise, I do stuff around the house—but it has an interpretive characteristic. I just listened to Trevor Noah’s completely riveting recapitulation of apartheid with the stunning characters of his mother and himself. In audio you get to know lot more about the state of the human condition. And I’ll tell you that I know of a book club in Washington D.C. where they listen to the same Jane Austen book by different actors and compare the interpretation.

Q: That is significant change in storytelling and information processing. The spoken word has so much more variety than text. Is that both good and bad?

A: When I started Audible there were gossip columns in New York that said that something had happened to me—I was a known figure with a couple of bestsellers—in that not only had I abandoned a perfectly good literary career but I’d abandoned text itself for this inferior mode of communication, audiobooks. My first reaction was to give speeches pointing out that textual culture was just another technology-driven phenomenon that was preceded for thousands of years by vibrant oral cultures that included the Greeks demonizing text as something that atrophied memory. And right through Augustine you weren’t even supposed to read silently, since it was thought devilish. And in the early audiobooks-on-tape days, text was sacred and the books guys would tell the actors to have no inflection whatsoever: Read it like you’re dead. Because otherwise it dishonoured, you know, the author’s words. Of course we changed all that.