Our book review of Denise Kiernan's 'The Girls of Atomic City' 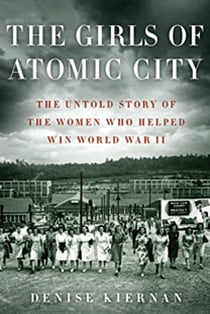 “It seems to be the most terrible thing ever discovered,” U.S. president Harry S. Truman confided to his diary as he contemplated unleashing an atomic bomb against Japan in 1945, “but it can be made the most useful.”

It was the promise of making a useful, if undefined, contribution to the war effort that drew thousands of women to a newly created factory complex at Oak Ridge, Tenn. They were clerks, chemists, machine operators and cleaners. They came from all over America to live in trailers and prefabricated homes in a town that didn’t officially exist, and to work on a project none of them were allowed to understand. Their job, they learned after atomic bombs obliterated Hiroshima and Nagasaki, was to enrich the uranium that made these weapons so destructive.

This is a social rather than a scientific history. Its focus is on previously voiceless women who worked together at a time when Americans shared a common purpose but were still divided by race. Black employees lived segregated lives under poorer conditions than their white counterparts, without their children and apart from their spouses.

Kiernan’s reportage is strong. She has a good nose for anecdotes. But her attempts to convey the personalities of the women she profiles fall flat. They are all uniformly, almost indistinguishably, plucky. Her prose can seem affected. A predilection for one-word sentences is grating. Melodramatic.

And yet the story carries itself along. The girls of Atomic City were making history. When they found out exactly how, most were pleased, if shaken. The war was also a terrible thing, and they wanted to shorten it. There was boisterous celebration at Oak Ridge when the Japanese surrendered. One young woman, who had played a small role in building the bomb, left the festivities, sat in her dorm room, and cried.