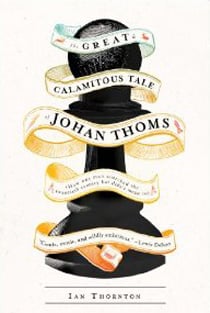 In the acknowledgements to his debut novel, Thornton, a peripatetic Yorkshireman who lived in Latin America and Australia before settling in Toronto, thanks “the unknown Costa Rican boatman who rescued my manuscript from a thieving spider monkey in Cahuita.” His tall-tale fiction is as wonderfully strange as the truth.

The titular Johan Thoms is, at the outset, a 109-year-old man looking back on his life as he prepares to step through a wormhole in time in order to stave off the First World War. His early years are a hoot: the melon-headed, prodigal child of a Bosnian mad professor, he grows up to have a debauched studenthood after getting head-butted by a stag. His wayward narrative is studded with chess diagrams, whimsical endnotes, chapter titles like “The Kama Sutra, Ganika, and Russian Vampires,” and epigraphs ranging from Boswell to Frank Zappa. But an unfortunate stint chauffeuring Archduke Franz Ferdinand around Sarajevo leads him to believe he’s set off a chain of destruction.

A tormented Thoms sets off on a decades-long picaresque journey across Europe, fleeing war at every turn, like an anti-Forrest Gump determined to stop having any effect on history. The book wreathes together real-life events and characters (a chummy George Orwell, a caustic Dorothy Parker) with wild, dreamlike, Terry Gilliam-esque scenarios. Thornton has a way with a simile (one character has “the physique of an unfinished sculpture”; another takes on “the expression of a man with a dead mackerel for a tie”), although at times he lapses into facile travel-speak (“Here among magnificent churches, and fine examples of Gothic, Renaissance, and Moorish architecture, they found a peaceful sanctuary”). And admittedly, the plot loses steam as Thoms degenerates from bon vivant to mopey madman.

The publisher trumpets Thornton’s book as “a heartbreaking meditation on chance, friendship, love, and regret,” though really it’s more of a hodgepodge, like an attic overstuffed with unfathomable antiques, the kind of story told by an eccentric grandfather whose wife says, “Don’t encourage him!” But fiction this audacious deserves to be championed.