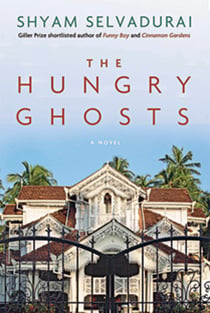 Self-sabotage is mysterious. Why, for example, would you push away the person you love most in the world? This question is at the heart of why Shivan, the thirtysomething protagonist of Selvadurai’s new novel, is travelling to Sri Lanka, where he grew up in the 1970s. On the eve of the journey, pining for the boyfriend he left in Vancouver, Shivan wonders whether karma—the belief that actions committed in previous lives come home to roost—is responsible for his heartache, as well as his family’s painful history.

When his father died, it fell upon six-year-old Shivan to appease his maternal grandmother, Daya, an angry and demanding woman, so she would take the family in. While he soaked up his grandmother’s recounting of ancient Buddhist tales about ghosts who haunt their future selves until past wrongs are redeemed, Shivan also chafed against her hold on him. He persuaded his mother to move the family to Canada, as much to get away from Daya as to flee the escalating conflict in Sri Lanka. Not that he could really escape—neither his grandmother nor his troubled country were anywhere near finished wreaking havoc in Shivan’s life.

This story feels epic for the ground it covers, temporally and geographically, and also for revealing how legacies are handed down through generations. In Shivan’s family, a virulent strain of resilience thrives—Daya survives being ostracized by her family for a sin she didn’t commit, reinventing herself as a powerful member of Colombo society; Shivan’s mother repeatedly overcomes self-destructive urges to build a better life for her family; both Shivan and his sister rise to the top of their fields at work. But Shivan nurses a twinned sense of bitterness and guilt, inherited from Daya, for the anguish he has both suffered and inflicted. And as much as he wants his trip to Sri Lanka to bring him closure, he knows that “denouements are often long in Buddhist stories”; “working off the karmic effects” of loss or betrayal or vengeance takes time. Which, he realizes, is often the point of the tale.