REVIEW: The Hunt for KSM: Inside the Pursuit and Takedown of the Real 9/11 Mastermind, Khalid Sheikh Mohammed 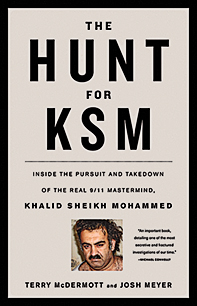 Osama bin Laden, the homicidal jihadist and de facto face of 9/11, was what the French call a frimeur—a pretender. The widely circulated image of him wearing a beard and that oddly benign look may have made for a great bogeyman in the years following the largest terrorist attack in the United States. Yet for all his supposed ferocity, bin Laden remained a wealthy Saudi dilettante who could barely fire his own gun. The true brains behind the operation was Khalid Sheikh Mohammed, a brutally tough Pakistani who devised the deathly simple plan of turning jumbo jets into missiles, and recruited 19 men deluded enough to carry it off. “KSM” hardly looked like a righteous ideologue; the picture snapped of him upon his capture shows a fat, hairy and dishevelled man literally dragged out of bed. Yet, as the authors document, being in bin Laden’s shadow distinctly benefitted KSM.

People, specifically American police and intelligence agencies, largely ignored him even after the Twin Towers fell. The Hunt documents how FBI agent Frank Pellegrino picked up KSM’s scent following the first World Trade Center bombings in 1993—which KSM also masterminded—and doggedly followed it despite a near-complete lack of interest from his superiors. Even in the wake of 9/11, KSM was ignored, if only because bin Laden was a far more mesmerizing target. Where The Hunt shines is in detailing the folly of the intelligence world’s obsession with bin Laden. It also serves as an argument against Dick Cheney-approved use of coercive techniques: the lies that spilled out of KSM’s mouth as he was being tortured sent the CIA on goose chases across the globe.

FILED UNDER: 95 books is a lot of readin' bookmarked Josh Meyer Khalid Sheikh Mohammed Terry McDermott The hunt for KSM: inside the pursuit and takedown of the real 9/11 mastermind