The inner sanctum of restaurant life: the staff meal

A new book offers a glimpse (and recipes!) of 25 food spreads prepared for employees at some of the world's best eateries 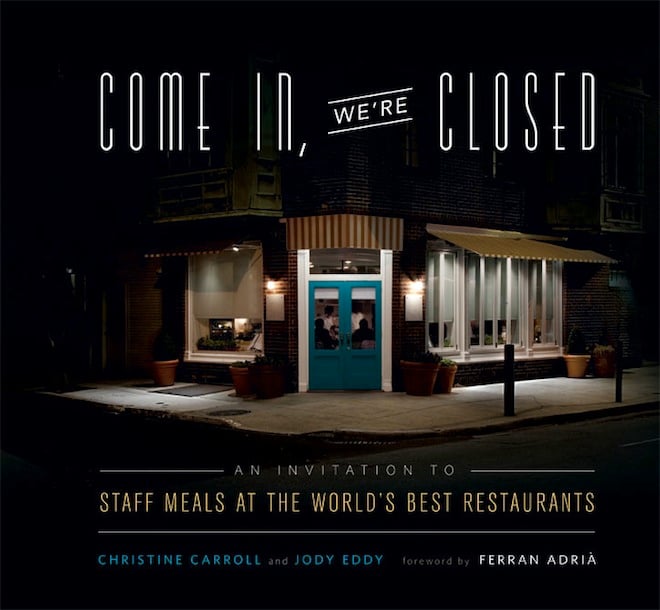 There’s a part of the inner sanctum of the restaurant world that no ordinary diner will most likely ever penetrate—and it’s called the staff meal.

A new book, Come In, We’re Closed, profiles what 25 restaurants, from Heston Blumenthal’s The Fat Duck in London to Thomas Keller’s Ad Hoc in the Napa Valley, feed their employees in those precious moments just before service begins. For each entry, there’s a short piece on the restaurant, an interview with the chef, plus detailed notes on the staff meal itself, including recipes.

Most of the chefs explain how important staff meal is for team morale and team-building, not to mention the old saying, “To cook well, one must eat well”: If you want your staff to know and appreciate good food, then feed them things that taste good. Ferran Adria of El Bulli, the Spanish temple of molecular gastronomy that closed last July, wrote in the book’s forward that after he and his chefs got organized enough to design three-course meals in advance for his staff, “the food got better and better and people started leaving the table much happier.”

A well-run restaurant leaves little food to go to waste,  meaning many staff meals utilize leftovers and bits and bops that might otherwise get tossed: think beef heart and watermelon salad or deep-fried chicken feet from The Bristol in Chicago or pork neck soup with dates and barley from The Slanted Door in San Francisco. And there are plenty of one-pot wonders and casseroles, which are perfect for family-style eating: think Maine shrimp and Andouille gumbo from Grace in Portland (Maine), curried rice with chickpeas from St. John in London, and good old lasagna bolognese from Frasca in Boulder.

Most of the featured restaurants organize their staff meal before the restaurants open their doors to customers, which means they’re eating dinner at the same time as my mother, say 4:30 or 5:00pm.  But Montreal’s Martin Picard’s staff at Au Pied de Cochon have their meal after the rush, meaning dinnertime is closer to 11:30pm. Why? “Because it is our way of doing things,” says Picard, in one of the most entertaining chef interviews in the book.

That’s been my experience in restaurants too: staff meal is always served after service. Years ago, I was lucky to work at a small restaurant with only five or six employees scheduled in the evenings. Our staff meal was simply ordering what we wanted off the menu, which was pretty incredible. However, I did gain a little weight because it was very difficult to opt for the lighter fare, like an Arctic Char salad, when there were braised beef short ribs with buttermilk mashed potatoes to be had. The other place I worked, an Italian restaurant, had a huge staff on hand any given night. At around 11pm, the cooks would prepare a glorious spread of pizzas, pastas and salads and we’d eat them family-style spread out in an area of the restaurant that wasn’t still filled with customers.

But more often than not, staff meals are infamous for being pretty mediocre, or down-right disgusting. A friend who worked his way up in a Michelin-starred London restaurant told me that the commis chef would often prepare a meal of cooked chicken necks taken out of the chicken stock for the staff. Another friend from New York said the worst staff meal he ever had was rigatoni with ketchup, which may not sound appealing to every palate, but I bet Honey Boo and Boo and family would find it down right delicious. Another friend, who worked at a place on Queen St. in downtown Toronto, described two staff meals courtesy of the very colourful chef: a “sloppy-jombler,” which was like a sloppy joe, but “way more disgusting,” and a very tough “beef stroking off.”

Still, free food is free food. And many restaurants don’t supply it free of charge to their staffs, or give it out at all. An intern here at Maclean’s recounted her days of working at a pub where employees were instructed to bring in their own sandwiches–and only sandwiches, because they’re less messy and time-consuming to eat, and they couldn’t eat them in public. The only place to wolf them down was to sit on the toilet in the “staff room.” It became so common place that even the managers started saying, “go eat your toilet sandwich.”

And then there are examples of restaurants so generous that one might consider changing vocations just to work there: a friend who’s serving in a restaurant in Oregon had this for his staff dinner the other night: A chickpea salad with watermelon, radish, sultana and celery; a mortadella salad with pear, arugula and pickled mustard seed; Castelvetrano olives; gnocchi with beef cheek, chanterelle mushrooms and braising jus; and a gigantic slow-roasted pork chop with Brussel sprouts, more chanterelles and apple butter.  He washed it down with a few glasses of barbera d’Alba.