The inside story of Purple Rain: Book review

Although an undeniably dated film, Purple Rain retains the best thing it depicts: Prince's status as one of the planet's finest live acts 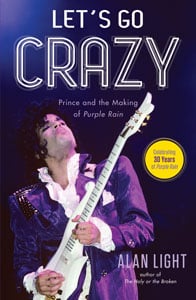 Let’s go crazy: Prince and the making of Purple Rain

In an age of oversharing, Prince remains opaque: a squiggle wrapped in a mystery inside an enigma. Last month, he erased his Facebook and Twitter feeds after controversies over a Toronto gig that never happened, and an online Q&A session that ended after only one “A.” On the 30th anniversary of Prince’s greatest success, rock journalist Light peers behind the curtain at a man who, once, during a rare interview, asked him to drink “to Oz.”

Not that the Purple One himself contributed here; even in 1984, he gave no interviews to promote Purple Rain, instead leaving guitar-and-keyboard duo Wendy Melvoin and Lisa Coleman as the film’s spokespeople. Light interviews them, and other band members and crew; all admire the talent, work ethic, and determination of the kid from Minnesota who, with no acting experience, strong-armed his label into funding and promoting a starring vehicle, and took it and its soundtrack to No. 1 in the U.S.

Purple Rain’s plot supposedly revealed his own experience as a strong-willed bandleader struggling with his musician father’s demons, but it also helped to sculpt his persona: It depicted his character’s mother as white, thus positioning Prince for ultimate biracial R&B-rock crossover appeal. And, where the filmic Prince loses his petulance and learns to open up, real Prince, according to Wendy and Lisa, was split between “the guy that you could bum around with” and “f–king George Jefferson.”

Light, who balances fanboy cheerleading with analytical nous, depicts how Prince harnessed his contradictions—sexual libertine and apocalyptic Christian, eager student and megalomaniac auteur, poodle-haired fop and dude’s-dude guitar god—to attract a huge audience. Immediately thereafter, he sabotaged his own superstardom, spurning the We Are the World recording session in order to party (though he contributed an original song to the accompanying album), cutting off the Purple Rain tour before Europe and Asia, and releasing the bafflingly psychedelic Around the World in a Day as a follow-up.

In the process, as Light notes, Prince lost the powerful team around him and the desire to self-edit that made Purple Rain his best album. But he also moved on from an undeniably dated film, while retaining the best thing it depicts: his status as one of the planet’s finest live acts—when he shows up to play.