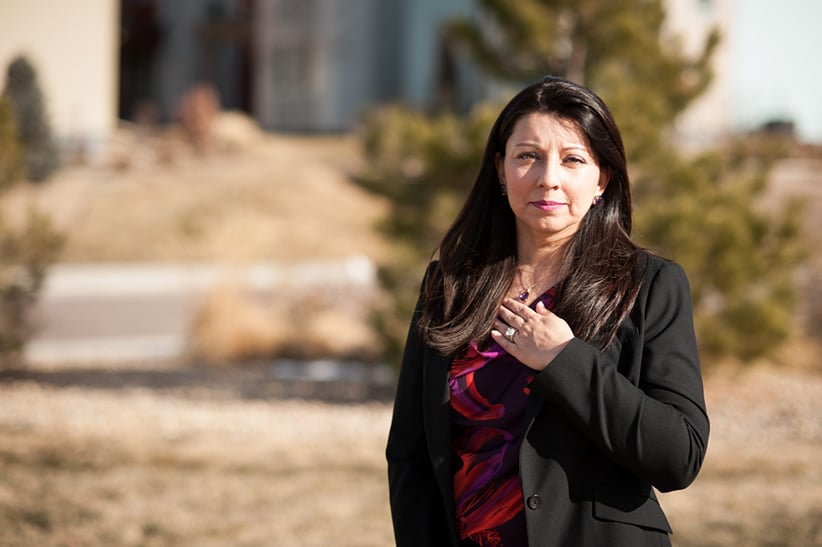 Born in Britain, and raised mostly in Toronto, Ausma Zehanat Khan, 46, now lives in Denver, where she writes what is rapidly turning into one of contemporary crime fiction’s most intriguing series. Her main character is a Muslim Toronto cop, Insp. Esa Khattak, who heads up the city’s community policing section, which handles “minority-sensitive” cases. In her novels, the second of which, The Language of Secrets, publishes on Feb. 2, Khan juggles her aims and materials with extraordinary skill: absorbing puzzles, intricate character development (not just Khattak, but his hockey-obsessed No. 2, Sgt. Rachel Getty) and an eye-opening portrait of Muslim life in North America today.

Q: Both Khattak novels were written in the U.S. Has what you’ve seen there in the past year affected your writing?

A: The rhetoric that ramps up in the United States during an election cycle has certainly affected me. As an election approaches there’s this search for bogeymen to invoke fear and rally people around a cause. I see a great deal of anti-Muslim rhetoric, to the point of anti-Muslim racism; a tremendous amount of bigotry fuelled by demagogic statements by presidential candidates. Those statements score political points—they rally the base or an extreme section of it—and they also have very real consequences for the lived realities of Muslims in the United States.

A: I have a lot of family living in the United States. There are a lot of kids—I have 12 nieces and nephews in all—studying in the American school system who are exposed to those comments quite regularly. A lot of the Muslim women I know are affected; a lot of the violence that has been sparked is very gender-based, because a Muslim women who wears a headscarf or a hijab is visibly identifiable—so there’s been a lot of name-calling, attacks. I was talking to a Somali-American girl in a store, who wears a headscarf, and I was asking her how she’s been managing in this climate. She described an incident from that same morning where she was walking to the bus stop and she was chased—she’s just a little twig of a thing—by this middle-aged man who was calling her names and coming after her and she had to run. I said to her, “When you go out, be careful—go in a group, take care of yourself.” Then she said to me very nonchalantly that this happens all the time, “no big deal, I’m totally prepared for it.” That was shocking for me but I hear from my friends, and I see it in the media all the time. Since December there’ve been reported more than 73 Islamophobic attacks in North America.

Q: Do you wear a headscarf?

A: I don’t. No one can visibly identify me as a Muslim woman until the moment that I choose to identify myself, so there is a certain level of protection with that—which is not to say that everybody that I encounter is filled with anti-Muslim hatred, just that there are certain situations where you are aware of it. When I’m in Toronto, and I’m out in public with friends, or my husband, I dress any way I want. Sometimes, as when I’ve just been praying, I will still have my scarf on, and I’ll go out and never think twice about it. I don’t feel the pressure of looks or judgment. But there have been many, many times here where I’ve felt that; that we’re attracting notice. So we’re careful. We don’t talk about issues in public, certainly not when we’re going to the airport. [laughs] We’re careful about what kind of books we have in public. When I want to pray inside my house, I draw my blinds. Those kinds of small accommodations are because you realize that people have heard negative things about Muslims and associate all Muslims with jihadists, and they’re wary and suspicious of them. And I’ve heard about Islamophobic incidents and attacks, so I’m wary and suspicious of other people, so it’s mutually reinforcing—even when I’m sure the majority of people don’t have those attitudes, just as the vast majority of Muslims are not jihadists. It’s a really sad state of affairs.

Q: You drew a line there, between Canada and the U.S., but it can’t be that absolute, after Paris and San Bernadino?

A: Even before. I was home in Toronto in December, but I wasn’t there during the election. But I was following all the election rhetoric, which to me seemed very divisive and ugly, and very un-Canadian, something I had never experienced in my entire life growing up or living there. There were times I would be reading stories coming from Toronto or Calgary and I simply couldn’t believe them, they just seemed so antithetical to everything I had ever known or experienced of Canada, a sense of people saying you don’t belong when we know full well that we do belong, that Canada is very much part of our identity. But certainly in the United States in particular it’s gotten very ugly since the Paris and San Bernardino attacks.

Q: Is the changing climate reflected in your novels? The first was set pre-9/11 and turned on ’90s war crimes against Bosnian Muslims, something central to your life when you were studying for your Ph.D. in international human rights law and working with refugees; the second is in the terrorist-plot here and now, and has a sombre dedication to your husband: “We have watched the world grow dark around us.”

A: In the first book, The Unquiet Dead, I was very much focused on telling the story of the Bosnian genocide that had been such a powerful part of my own life. But with the second book, yes, I’d been thinking about everything that’s happened in the last 15 or 16 years—this question of two groups becoming further and further alienated from each other through misunderstanding, ignorance, and a tendency to generalize and implicate an entire faith community. That dedication, though, was actually not about the climate toward Muslims in the West, it was about what’s happening to the Muslim world. My husband is a professor of Middle East politics and an expert on Islamic democracy, so he travels to the Middle East frequently. He comes back with a lot of stories and our families are respectively from Pakistan and Iran, so we’ve seen one disaster after another. In the entire Muslim world, the picture is bleak, particularly with Iraq and Syria, but all over. A tremendous darkness on what was once such civilizational beauty, and elegance, and grace. That’s the darkness that I’m trying to describe.

Q: You spoke of prayer earlier. Islam is more than a cultural identity for you; you are a practising Muslim?

A: I would consider myself one. I’m very inspired by the Islamic tradition—there’s a lot of richness and beauty to it. In terms of how I live my daily life, I think I’m no different than everybody else. We think we have the same values—kindness, charity, obedience, in some ways, obedience to God. You want to live a God-centred life and a life that’s productive and enriching not just for yourself but for your whole community. And whether people believe in God, that is how most live, trying to do productive things, to be kind in their daily lives, to give to charity, to try to have charitable thoughts. When I say that I’m a practising Muslim, that’s what I mean: I’m just trying to live an ethical life.

Q: That’s Khattak, too. He thinks constantly about how to live his faith in an ethical way, even as he faces suspicions from fellow Muslims—whose collective memory of injustice in Canada and in the Middle East he shares—who believe he’s sold out, and from fellow cops who don’t trust his loyalty.

A: He realizes that many times in his life—just as I have myself—he’s come up against very dogmatic and rigid and ultra-conservative interpretations of Islam and he’s thinking that maybe there was a responsibility on him to speak up more. I’ve tried to go very deep into the interior of the Muslim identity—all the thinking about Palestine and the Arab Spring and the bombings and repression—and the varying pressures on Muslims in the West. I was exploring the idea of being squeezed, which is what Khattak is articulating here, that on the one hand there are the people who have subverted their own tradition and turned to violence, and on the other inflammatory rhetoric that generalizes the entire faith community to this extremist fringe. Khattak, like the rest of us, feels that pressure all the time, having to defend yourself against extremists within and assaults from without, having to prove a negative, proving you’re not an unindicted co-conspirator.

A: In my third book I send him to Iran, where Khattak, who’s from that same majority Sunni tradition as me, will be in the minority in a Shia country. I wanted him to examine the privilege of membership in a majority tradition, where you never have to think about the feelings or the traditions of the other and see what that feels like. I like to put him in situations where he’s uncomfortable, and has to examine his perspective and assumptions much more critically.

Q: You should cut him some slack. He’s already been unhappy for 600 pages.

A: Only moderately! And besides, happy people don’t make for good writing.