The Interview: Patrick deWitt, on life after 'The Sisters Brothers'

Award-winning novelist Patrick deWitt on his newfound fame, the author tour—and judging a book based on its characters’ likeability 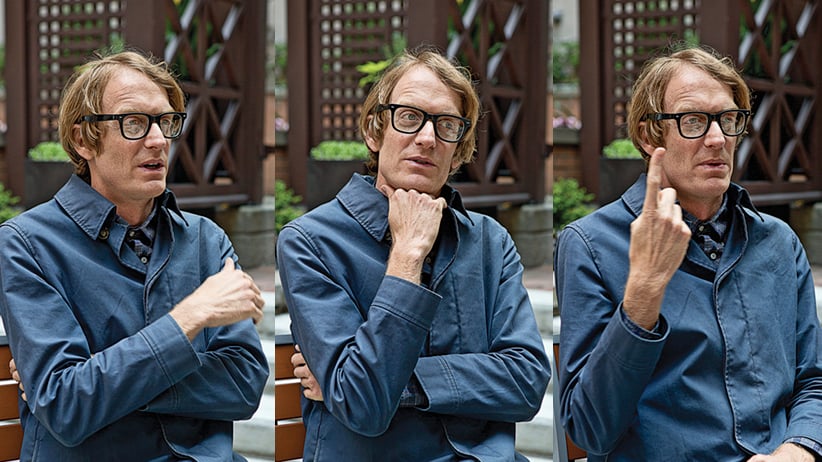 Born on Vancouver Island, Canadian author Patrick deWitt, 40, now lives in Portland, Ore. In 2011, the very definition of an obscure writer—his 2009 novel, Ablutions, wowed critics but not readers—deWitt was catapulted into fame by his second book. The Sisters Brothers was nominated for all three major Canadian literary honours—the Scotiabank Giller, the Rogers Writers’ Trust and the Governor General’s award—as well as the Anglosphere’s most prestigious fiction prize, the Man Booker—and won two of them. The next year he took home the Stephen Leacock award for his darkly funny tale of two fraternal assassins during the California Gold Rush. Obscurity is no longer deWitt’s lot, and he’s already on tour to promote his third novel, Undermajordomo Minor, set to be published in September.

Q: What were the effects of the tsunami of attention that struck you three years ago?

A: There was so much of a before and after that it took me months to understand. I went from having maybe 2,000 readers to having many more. In the years since I realized how lucky I was to have that happen. The hardest thing in the world for a writer is to amass a readership. So many good books come out and so many good books disappear. I felt like my first novel was a decent book, and it just vanished. So something occurs in you, after readers first notice your work, where you don’t want to lose that. I don’t think it’s corrupted me or informed my work, but it’s there. I’m not keen to go back to the way things were.

Q: Were you some sort of hidden Canadian? Did your fellow Portland writers experience citizenship envy?

Q: And then there’s the media intrusion.

A: I am a homebody, something that lends itself to my profession. Now I have to leave the house more often, and I have to socialize more than I’m used to or would care to by nature. Sometimes that’s more apparent to me than others. There have been times in the past three years when I’ve longed for the solitude of my previous life, but I accept it as part of the way things are now. I’ve even come to enjoy the travel, because it means meeting publishers, agents, booksellers—all people rooting for the same thing—who make you feel like you’re part of something larger and grander than yourself.

Q: I remember how surprised I was four years ago to realize a writer nominated for every major prize in the country had never been to Toronto, the centre of Canadian publishing.

A: I’m sure that was probably fairly annoying for certain people to think about. But I’ve always been on the West Coast, although my mother and father lived in Toronto. The question about my Canadianness comes up a lot and I’m never quite sure what to say about it. I’ve carved a life out for myself in Oregon and it feels like home, not because it’s the States but because that’s where my friends are and where my son is. He goes to school there and I’m not keen to upset that. I love returning to Canada and seeing more of it. My first book didn’t come out here until Anansi republished it after The Sisters Brothers’ nominations, because I couldn’t find anyone here to take it on before.

Q: That’s what you meant by books vanishing, which is a major element in the way you wrestle with fame. You can now be sure that your books won’t be lost in the shuffle, and that has to be a good feeling.

A: That’s the hope. There’s an interview with artist Ed Roche where he talks about how he wants a long shelf life and I remember not understanding what that meant, that it sounded almost vulgar. Now I get it and I think I’m after the same thing. He meant that he didn’t want to make something that was created and digested in a flash, but something that had some lasting power to it. In writing that means that you want your books to stay in print, to have bookstores continue to stock them, to have people continue to buy them. I suppose that’s what all artists want, but it’s recently become more prominent in my mind as a goal. It makes the work seem more purposeful. I wrote for so many years in a bubble, the way everyone does, and there were large swaths of time where you think you’re doing this for nothing. An audience is crucial, a back and forth with the invisible readers.

Q: The pre-publication tour you’re on now is rather big league. Margaret Atwood is launching one next week. What lies behind these?

A: It’s new for me. The book’s not even out, no one’s read it yet, and here I am doing press for it. It does feel next level, I’m not used to dealing with it. I’ll assume it’s serving a greater good. The fact that my publishers [in Canada, the House of Anansi] asked me to do it shows good faith on their part. And they’ve shown faith in me, so here I am.

Q: The cover of Undermajordomo Minor is instantly recognizable in its design, even more than your name is. Someone who saw me reading it, asked “Hey, is that by the guy who wrote Sisters Brothers?” Its cover has become iconic. Did the same artist design the new cover?

A: Yes, a Portland artist named Dan Stiles. We were all keen to give Dan another shot, after he did such a great job with Sisters Brothers. I do feel like this new book is a continuation, in some ways, of Sisters Brothers, stylistically and thematically. So it seemed apt to me that the image would be similar as well.

Q: The titles too seem of a piece.

A: Yeah, two confusing titles. I’m not good at those, my cross to bear. I didn’t title either.

Q: That’s surprising, given how much you clearly care about your characters’ names.

A: I know, it’s bizarre. I turned in Sisters Brothers under a different title that was rejected. Finally, my editor said, “Can we just call it Sisters Brothers and get on with our lives?” I thought it was a terrible title. Now I love it, because it helped the book. This new one’s a bit of a mouthful, so we’ll see how people react. I handed it in a year late and by then I was brain dead. I told them, “I don’t know what to call this.” My editor came up with the title. This one, I really like.

Q: Do you ascribe much importance to the cover-title combination?

A: From a cross-selling point of view. What are a cover and title meant to do but make a reader curious, like a barker at a carnival, who just needs to get you inside the tent. It’s common for me to go into a tent and like it even if the barker has done a terrible job, but that’s not for everyone. With some covers, I think it’s a wonder I went into the tent in the first place. I know that’s a bit gross. But you work on a book for however many months and you want it to have a chance, and part of that is packaging it.

A: Likeability is a bit of a loaded word for me, like readability. The year I was up for the Booker the chair of the jury praised the nominees for their readability, and got slammed for it, as though “readable” meant “disposable, not serious” and had nothing to do with the criteria for quality modern literature. My favourite works of fiction are not laborious to get through but that doesn’t mean they don’t have depth. Similarly some of my favourite books have despicable protagonists but I find them fascinating. People read for different reasons. Most want to be entertained briefly and move on with their lives instead of some deep and lasting connection, so they like characters that are charming or funny. But I hope some might be willing to push a bit deeper and look to spend time with characters who aren’t entirely likeable. Lucy [the male protagonist of Undermajordomo Minor] is certainly interesting for me, I hope he is for the reader, too.

Q: You plan to add a list of literary influences, specific to this novel, which is unusual. Why?

A: I find readers and journalists like to assign influences to me. I’m sure this happens with all authors. They says things like, “You’re obviously influenced by such and such,” but more often than not, they’re wrong. I added a list to the end of this book.

Q: The new book is a Grimm’s fairy tale in the same way the previous was a Western, which is to say in a deWittean manner. You seem to like the straightforward way outlandish events are presented in both genres.

A: Narrative is the direction I want to go now and my instinct is also to go non-contemporary, to write under the cloak of opaque historical setting. There are the 19th-century trappings from both Westerns and fairy tales, but both novels—which are bookends—are imbued with modern sensibilities. There are a lot of neurotic underpinnings that pertain more to life on Earth now as opposed to back then, but with the traditional touches.

Q: The setting grew out of the fairy tales you were reading your son, who’s 10. What he is reading now?

A: He’s more interested in sports now. He’s a good boy, doing a good job, rebelling against his father and everything he holds dear.