The invention of positive thinking 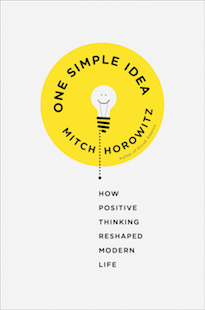 Everyone agrees a positive outlook on life is a good thing. But why?

“Positive thinking forms the keynote of modern life,” writes Horowitz, pointing to such familiar cultural touchstones as Nike’s “Just do it,” The Little Engine that Could and pretty much anything Oprah Winfrey has ever said or done. “But the concept is newer than we think.”

Horowitz takes readers back to the early days of the notion that how and what you think influences the reality of your life. Patient zero is New England clockmaker Phineas Quimby, who in 1833 was suffering from the twin demons of tuberculosis and the prescribed treatment of the day: a toxic mercury-based medicine called calomel. Quimby eventually decided to ignore his doctor’s prescription and go riding instead, discovering he felt much better once he focused on enjoying himself.

Quimby quickly gained renown for arguing that positive thoughts have the ability to cure disease. This in turn influenced Mary Baker Eddy’s founding of Christian Science and its belief in the healing power of prayer. New Thought, as it came to be called, was also a driving force behind the 19th-century suffragette movement and labour reform. Thinking about a better world could make the world better.

By the 1930s, the notion had transformed itself into the personal self-help industry—teaching adherents how to win friends, grow rich or fight addiction. By the 1980s, perpetually sunny U.S. president Ronald Reagan put positive thinking on the political map as well.

But can mind-power alone—through prayer, af?rmation, visualization or inspiration—actually exert a measurable impact on physical outcomes? The documented success of placebos, for example, suggests certain scientific advantages to mental therapeutics. As do recent discoveries in brain plasticity and quantum physics. But even Horowitz, who clearly wants to believe, admits that, in its purest form, the power of positive thinking has some serious flaws. For if success and health are solely dependent on happy thoughts, then failure and disease must inevitably be the fault of the victim, however upbeat they may seem. And that’s a rather depressing thought to contemplate.