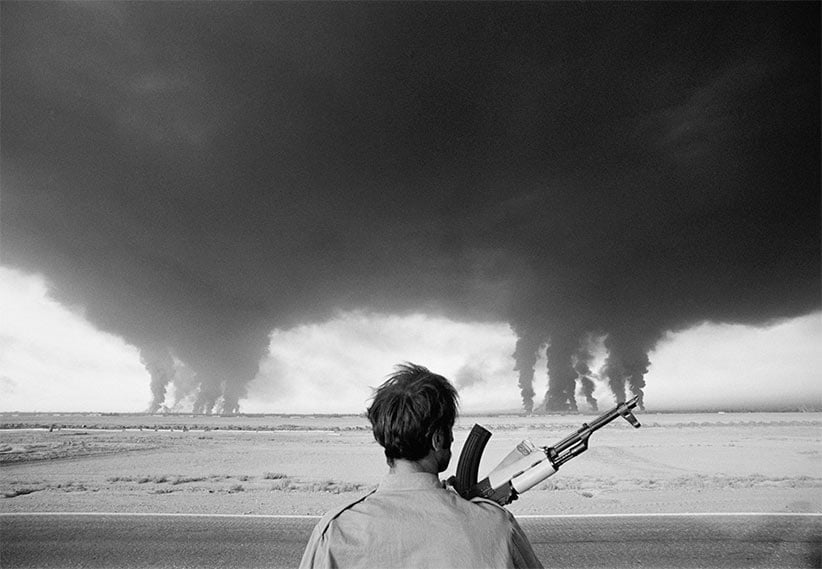 September 1980, Abadan, Iran – An Iraqi soldier watches as the Iranian Abadan refinery, located near the Iraqi border, burns. The Abadan oil refinery was under constant fire from the Iraqi air force during the Iran-Iraq conflict. (Henri Bureau/Sygma/Corbis)

Few events in the 20th century were as large and remain as poorly understood by outsiders as the eight-year war between Iran and Iraq. From 1980 to 1988 the two countries, which share hundreds of miles of border, fought with ever-escalating desperation and brutality, at a combined cost of 680,000 killed or missing. The events of that war continue to have a profound effect nearly 30 years later, in a region where Canadian soldiers continue to play a little-understood role near active combat zones. But for most Westerners the Iran-Iraq war means nothing.

Pierre Razoux was in Ottawa last week to receive a Distinguished Book Award from the Society for Military History. Razoux is the research director of the Institute for Strategic Research in Paris. His book The Iran-Iraq War shines extraordinary light on a war whose aftershocks still resonate.

“You can’t understand the political situation in the Persian Gulf and the Middle East without understanding the Iran-Iraq war,” Razoux told me. “It had the same impact in that region that the First World War had on Europe.”

Why? As a military historian, Razoux found Iran-Iraq to be a grim candy shop of comparative tactics. “It’s a replica in miniature of every 20th-century war. You find the trench warfare, the chemical warfare, the war of attrition, the mass offensives of the First World War. You also see the terrorist attacks, the armoured combat, the blitzkriegs of the Second World War. You see the wars of decolonization,” including the mountain warfare of the Algerian war of independence and the various wars in Afghanistan, “in Kurdistan. The marsh war was like Vietnam. The air war was like the Arab-Israeli war with its advanced technology.”

But the end of the fighting didn’t end the bloody war’s repercussions. To the extent it had a winner, it was Saddam Hussein, but to fight it he had incurred massive debt from Saudi Arabia and the Gulf states, who rather liked to watch him keep the Iranian regime busy for most of a decade. At the end of the 1980s he toured his creditors asking them to forgive his debts. The emir of Kuwait refused. So Saddam, his monumental ego inflated by victory over Iran, invaded Kuwait. The Americans had sided with Iraq in the late stages of the war; now the elder George Bush assembled an international coalition to push Iraq out of Kuwait. Even then, he left Saddam in power to avoid a vacuum Iran would rush to fill. His son would not be so careful.

“Throughout the Iran-Iraq war,” Razoux said, “these were the Iranians’ strategic goals: to depose Saddam Hussein; to instal Shias in power in Baghdad; and to break the Iraqi shield.

“For years, Iraq had been used by the Saudis and by Turkey to create a Sunni shield state against the projection of Iranian power toward the Levant and the Mediterranean. To break the shield, you had to bring Saddam down, make the Ba’ath party [the secular instrument of Saddam’s power] fall, and establish a Shia regime in power in Baghdad. That’s exactly what the Americans delivered on a golden platter in 2003. If I wanted to be just a little provocative, I’d say the Iranians should erect a statue in George W. Bush’s honour in the middle of Tehran.”

To tell his story, Razoux had access to an extraordinary stock of information that had eluded earlier Western investigators. Only two countries, France and Germany, kept embassies in Baghdad and Tehran running throughout the war. Razoux was able to consult memos from military attachés in the French embassies in both capitals. But what was “colossal,” he said, was his access to Saddam’s office tapes. This is the first Western account of the war to make such extensive use of the materials from the Saddam audio archive. 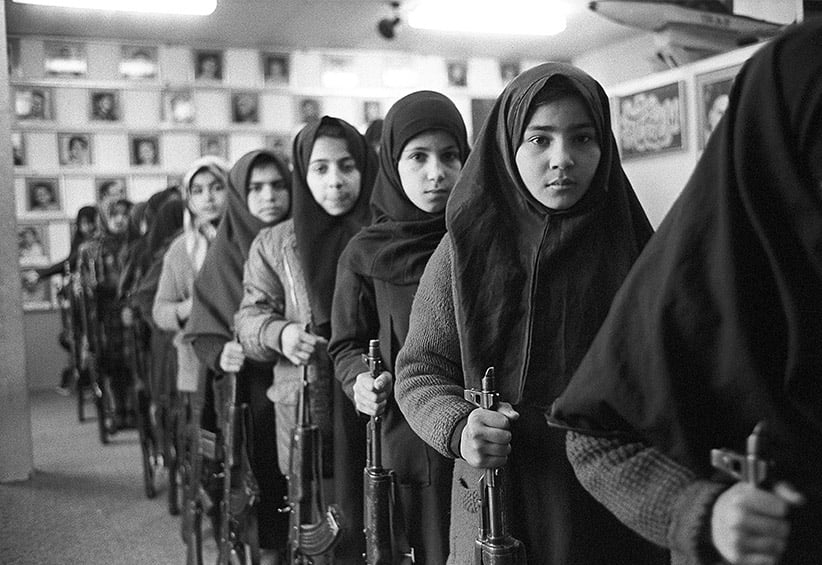 Tehran, Iran: Young schoollgirls in Islamic veils go through arms training as a Basijis (mobilized volunteer forces) while holding AK47 automatic assault rifles and standing in front of pictures of martyrs of Iran-Iraq conflict in a mosque in Tehran, 1988.
(Kaveh Kazemi/Getty Images)

Like Richard Nixon, Saddam bugged his offices and taped every meeting and conversation for nearly a quarter-century. When the U.S. invaded Baghdad in 2003, Saddam’s palace guard traded immunity for the tapes. The recordings showed Saddam authorizing the 1988 chemical-gas attack against Halabja, which killed up to 5,000 Iraqi Kurds. The evidence was key to the prosecution case that led to Saddam’s execution, but afterward investigators kept transcribing, translating and cataloguing the tapes. They’re still not done.

The U.S. government gave Razoux access to thousands of pages of transcriptions. “I had the feeling of being a fly on the wall, listening to all the most crucial meetings of the war. It’s fascinating, because you hear another side of Saddam. Like a little boy, he keeps asking why. He had no military training. He never even did his military service. He finally asked his cousin, Adnan Khairallah, his war minister, to teach him the rudiments of warcraft. This was 18 months into the war.”

The war began in September 1980 with Iraqi air strikes against Iranian airbases. Saddam followed with a ground invasion. Razoux’s account of the conflict’s early days is a chronicle of military ineptitude on both sides. Bombers miss most of their targets, casualties are low—this would not last — and neither side can gain early advantage. The Iraqi leader was astonished when Iran refused early offers to negotiate a peace. But both sides had their reasons for wanting this conflict, and both would be well into it before they started to worry about how it would end. Both regimes were new in 1980. Saddam had pushed aside his mentor, the ailing Ahmed Hassan al-Bakr, to become Iraq’s ruler. In Iran, an Islamist revolution had overthrown the American-backed shah. The swiftness of the Shia revolution terrified Saddam, a Sunni running a secular dictatorship in a majority-Shia country.

On both sides of the border, “this was a war for internal consumption,” Razoux said. Saddam wanted to warn Iran against exporting its revolution, and to establish himself as the most powerful leader in the Middle East. For Iran’s Ayatollah Khomeini, the war offered a chance to break the secular parties and the various castes of Iranian society, to rally all Iranians against Iran’s traditional regional rival, Iraq.

“Everyone was wrong,” Razoux said. “First, Saddam Hussein thought his armoured divisions would be welcomed with open arms” by the Arabic-speaking residents of the Khuzestan border region in southern Iran. “But they fought back. He had underestimated the power of Iranian nationalism, beyond religious divisions. That was a complete failure of calculation.”

Khomeini pursued the war long after he could have ended it at minimal cost, because he was sure that at some point Iraqi Shias would rise against Saddam. “There too he was completely wrong. The Iraqi Shias didn’t rise up at all. Saddam had assigned the defence of key areas to Shia generals. He told them, ‘It’s your city, it’s your population, it’s your responsibility.’ Implying it was their head that was at stake too.” But the generals defended key cities like Basra fiercely, “of course because their life was at stake, but also because it really was their city and it was out of the question to let it fall into the Persians’ hands.”

Iraq should have lost the war. Smaller than Iran, with one-third the population, its major cities dangerously exposed—Baghdad was six minutes by air from the border, Tehran much more securely protected by most of Iran’s bulk—its only hope depended on the advantage of surprise, which Saddam squandered. Razoux believes the key to Iran’s defeat lay in events that eerily match the latest headlines today.

“I demonstrate that what hurt Iran most was the fall in the price of oil, between 1985 and 1988,” he said. For years beginning in 1982, Ronald Reagan’s vice-president, George H.W. Bush, and his CIA director, William Casey, had been travelling to Saudi Arabia to plead for increased oil production to bring the cost of a barrel of oil down. In 1985 the Saudis finally relented. A decline in the exchange rate of the U.S. dollar exacerbated the effect of the plummeting oil price. Both Iran and Iraq saw their GDP fall by three-quarters.

But Saddam had taken care to ensure he could fight his war on credit offered by the Gulf states, the Saudis, the Soviets and the U.S. The mullahs of Tehran had no such luck. “Nobody would give Iran a cent of credit.” 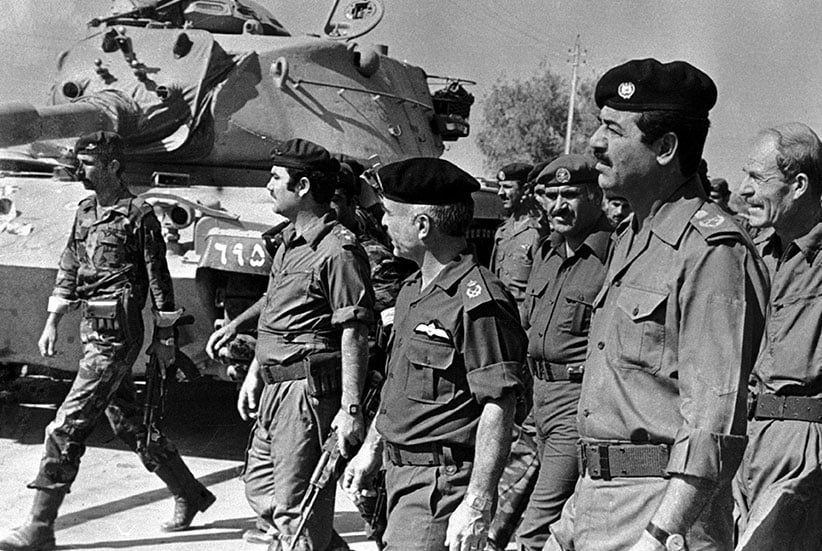 Other analysts have long wondered whether the Reagan administration had something to do with the mid-’80s oil crash. Razoux gives the theory complete credence, on the basis of “credible sources” he does not name. To some extent the Americans and Saudis were at cross purposes, he says: “The masterstroke of the Americans was to make the Saudis believe this strategy was about reining in Iran. Which was also true, but for the Americans it was a secondary concern. For them the real goal was to bring the Soviet Union to its knees.”

Here, perhaps, is the most eerie parallel to current events. “Exactly the same thing is happening today,” Razoux said. A Saudi-driven oil glut has driven the price of oil down. Again he believes the Americans are behind it, with the same two targets in mind as in the 1980s.

“The strategy is to soften Iran up for nuclear negotiations, by twisting their arm economically. And it’s to punish Putin for his actions in Ukraine and Crimea. Putin played chess. Americans don’t play chess, they play Monopoly. Putin moved his pieces and calculated his responses to any American move. ‘If the Americans move against Kaliningrad, I’ll do this, if they react in the Middle East I’ll do that.’ The Americans said, ‘We won’t play that game. We’ll wage economic war.’ ”

This would help clear up certain enduring mysteries, if true—including the reluctance of the Obama administration and its allies, including successive governments in Ottawa, to rile the oppressive Saudi regime. Razoux’s analysis, and its resonance in the latest headlines, is haunting. But not more haunting than the story of two callow and murderous regimes that threw all their might, and hundreds of thousands of their countrymen, into an eight-year meat grinder.