REVIEW: The Kings of Cool 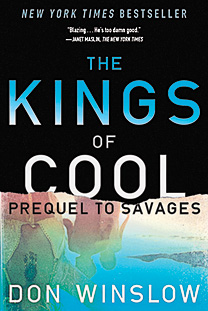 Much of this book is about sex, drugs and murder, but it aspires to far more. Winslow ostensibly penned this prequel to satiate readers who wanted to know how the young Californian marijuana dealers in his bestselling Savages got so cool in the first place (the title Kings of Cool is less ironic than one might expect, thanks to its pervasive reverence of youth). We join brainy Ben, soldier Chon and nymphet O, their love triangle still inchoate, five years before. Winslow also introduces far less sympathetic characters from the previous generation. At first the ’60s surfers and hippies just wanted to make love and get high; the drug war in Mexico would come later.

An author who begins a book with a two-word sentence/paragraph/chapter—in this case, “F–k me”—is probably trying hard to win style points. Indeed, Winslow has an aversion to full sentences. His paragraph breaks do the job of punctuation. The words themselves evince unmistakable wit and intelligence. Winslow often writes funny things, and sometimes smart things. When a beautiful teenager dazzles at a ball, “one of the young Men recognizes himself as a cultural trope and obediently plays Prince Charming.” It is hard not to have sympathy for an author who casually remarks in parentheses that “the whole concept of ‘omniscient narration’ is pretty f–ked, anyway, right?”

The book’s best and most ambitious chapter cuts between a drug raid in San Diego and a Taliban raid in Afghanistan. Winslow evidently finds both wars—against drugs and against terrorism—absurd and misguided, doomed attempts to get bad guys that are merely the latest heads on a hydra.

Meanwhile, Winslow sets the plot, which runs from 1967 to 2005, on a surprisingly elegant cultural backdrop of American social upheaval. We probably already knew that idealist hippies in the ’60s became baby-boomer materialists by the ’80s, but Winslow shares this life arc through the eyes of Californian drug dealers. Pulp rarely gets so close to art.