Why Russians are disappearing

Author Oliver Bullough explains in his new book, 'The Last Man in Russia' 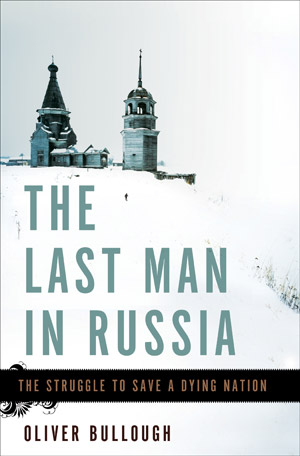 Foreigners think they know how much Russians drink, but you really have to be there, writes Bullough, to see an alcoholic society—and its effects—in action. Bullough, a Briton who spent seven years as a Reuters correspondent in Russia and other former Soviet republics, reels off a series of statistics and personal accounts that reach far beyond the journalistic cliché of “sobering.” Russians have been on a 50-year bender, and not just men: anyone riding the Moscow subway can see well-dressed young women drinking beer from cans on their way to work. And the more Russians drink, the quicker they die and the less they replace themselves.

Russian life expectancy hit a high in the mid-1960s—69 years, the same as in the contemporary West. Since then, Westerners have added about a decade and a half to their average lifespans, while Russian life expectancy for males has shrunk to 63 and Russians of both sexes are five times more likely to die of “external” causes—murder, suicide, drowning, car crashes—than West Europeans. Birth rates cratered along with the Soviet Union; there were 148 million Russians in 1990; now there are 141 million. The country, Bullough argues, is dying from within.

What distinguishes The Last Man is the way Bullough searches for why, which he does by tracing the story arc of a dissident Orthodox priest under Communism. As much as Dimitry Dudko preached the saving message of the Gospel, he also ceaselessly urged Russians—thousands of whom attended his 1970s sermons—to fight state attempts to divide and break them, especially along ethnic lines, and to form communities of trust, however small, in which no one had to fear that everyone around him was a potential informer. But the KGB eventually got to him too, and Dudko appeared on TV in 1980 to say the Kremlin was right all along: the Jews and enemy spies were to blame for everything. In Bullough’s retelling, Dudko’s story is Russia’s: a broken man representing a broken nation. “If you deny people hope and love and friendship, then they sicken and despair,” he writes. “They drink themselves to death, and they stop having children.”