Review: The Last Viking: The Life of Roald Amundsen 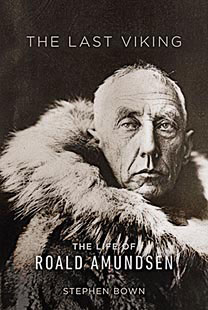 Before Norwegian Roald Amundsen came around, no human had ever set sight on the South or North Poles. Amundsen was born in 1872 and decided as a young man he wanted to be a hero. In the course of his life as a death-defying adventurer, he sailed through the Northwest Passage, rode a dog sled to the South Pole and flew over the North Pole, all to the delight of an enraptured global audience. He died at 55 on a foolhardy impromptu flight to rescue a stranded foe in the Arctic, not long after he told a journalist that he had achieved all his dreams: “There is nothing left for me to do.”

Bown draws on extensive research and access to the personal journals of Amundsen and his travel companions to paint rich and gripping accounts of his perilous voyages. These are often marvellously entertaining. At times the biography can seem overly reverent, but it becomes clear that Bown simply intends a robust defence of his subject’s fading and embattled legacy.

Amundsen defied the odds through obsessive preparation and innovation. He adopted Inuit clothing and igloo techniques, designed his own snow goggles, and even contemplated using polar bears to pull his sled (a plan wisely abandoned a few years before he was mauled by one of the toothy white giants). That he survived as long as he did was a miracle, but he made much of his own luck.

Amundsen cared nothing for money—it was simply a means for adventure—but he needed a lot of it. He spent his inheritance on his first boat, and even then he literally fled his creditors as he set sail. His multi-year-long expeditions were expensive, so he learned to leverage his celebrity into a fortune. He sold news as a commodity and sponsored the products of his patrons. He went on lucrative lecture tours, which he viewed as a tiresome necessity despite the public adulation. A spendthrift on dreams, he was a tireless fundraiser. He died bankrupt, missions accomplished.