The Afghan Warrior who Led U.S. Special Forces to Topple the Taliban Regime 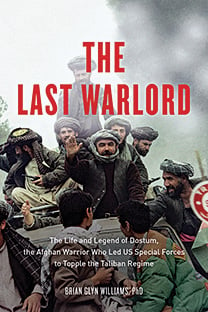 The Last Warlord: The Life and Legend of Dostum, the Afghan Warrior who Led U.S. Special Forces to Topple the Taliban Regime

In October 2001, a bloodied and long-time opponent of the Taliban radioed his adversaries in the mountainous Darya Suf Valley of northern Afghanistan. “This is Gen. Dostum,” he told them. “I am here, and I have brought the Americans with me.”

So began the climax—so far—of Afghan-Uzbek warlord Rashid Dostum’s long and eventful career. He was an army commander for the Soviet-backed government in the 1980s, and then joined the mujahedeen who overthrew it. Secular compared to most Afghan leaders, Dostum could never abide the Taliban. Only weeks before delivering that boastful radio taunt, he appeared to be making a doomed last stand against them. Dostum and his band of raiders were cut off and isolated in the Hindu Kush. The great northern capital of Mazar-e-Sharif lay in Taliban hands, thousands of its residents ritually slaughtered. The Taliban’s conquest of Afghanistan seemed unstoppable.

Then the Twin Towers fell and America’s wrath came to Afghanistan. The United States needed allies on the ground. Dostum offered to lead his horsemen alongside the avenging Americans. What followed was an unconventional and stunningly successful campaign. The American commandos who joined Dostum were told they might be in theatre for a year. Instead, with the Americans calling in air strikes and Dostum’s Uzbeks charging tanks on horseback, the Taliban were routed and Mazar-e-Sharif liberated in weeks.

Williams paints a sympathetic portrait of a widely vilified strongman accused of numerous crimes, including complicity in the murder of Taliban and al-Qaeda prisoners—charges Dostum denies. Williams’s prose can be overcooked, but he tells a good story. Dostum trusted him. He welcomed the American historian as his guest and sat down for long interviews with him. Dostum has recently announced his intention to contest the 2014 elections as a candidate for vice-president. A sequel may be in order.