A mischievous follow-up to The Elegance of the Hedgehog

In The Lives of Elves, Muriel Barbery proves she is doggedly brave by straying so far from her original best-seller 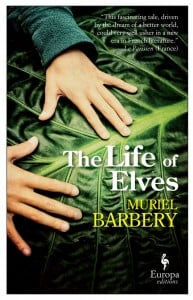 THE LIFE OF ELVES

How do you follow up an out-of-nowhere runaway bestseller? If you’re Muriel Barbery, you wait nine years before publishing a book so different it could have been written by another author. Her strategy is either mischievous or doggedly brave.

Word of mouth helped The Elegance of the Hedgehog—the second novel by a previously unknown French writer—sell an astonishing six million copies. It’s a witty, knowing, and overtly philosophical story set in contemporary Paris. In contrast, The Life of Elves (published last year in France, and now translated lovingly by Alison Anderson) is bucolic, bereft of cultural references, and teeming with mystical images and irony-free use of the word “soul.”

Its protagonists are mysteriously orphaned 12-year-olds who live in rural Abruzzo and Burgundy, respectively, at an undefined time in the past. Both have abstruse magical talents. Clara’s piano-playing connects listeners to other lands, while Maria creates life-changing art from everyday things: “While the little French girl’s hand moves the glass and adds a fragment of ivy, there is a redeployment of the entire universe.” Both also have connections to good elves who live in a nearby world of mists, while one bad elf who attacks the countryside with the aid of a Roman governor. Cue a battle that reads like an allegory of capitalist progress versus old-fashioned rural values (shades of Tolkien’s Shire), although Barbery is stingy on motivation.

The Life of Elves is so gravid with food and nature imagery it could give D.H. Lawrence pause. Barbery slathers on the similes: a word of love is “like water one could hold in one’s hand like a pebble or a flower.” The book’s pace is languorous—imagine an entire episode of Twin Peaks devoted to Agent Cooper’s rhapsodies about cherry pie. This is a richly textured world with oblique, seemingly private symbolism, reminiscent of outsider art. Indeed, Barbery recently told the Independent, “I have always written in private without really wanting to be published.”

One character muses, “I would not be surprised if, in the end, we find out that we are all the characters of some meticulous but mad novelist.” Is Barbery playing a game with her readers? This is the first book of two, so there could be a surprising payoff—but only those with a taste for straight-faced whimsy will be driven to find out.

FILED UNDER: book reviews Muriel Barbery The Elegance of the Hedgehog