Review: The Lost Carving: A Journey to the Heart of Making 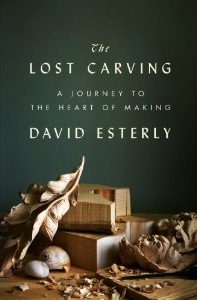 The wonderfully named Grinling Gibbons, whose 17th-century woodcarved masterpieces of flowers, fruits and foliage can be seen in London churches and stately homes across the British countryside, is something of a folk hero to the English, one of the few artists of his time and medium whose name is still remembered today. David Esterly, on the other hand, is an American carver, once a Fulbright scholar who was in Britain researching his doctoral thesis on Yeats, when he encountered a Gibbons carving. In that moment of “conversion,” Esterley writes, he suddenly saw “in a way that I’d never seen anything before.” It led to an overpowering desire to unite mind and hand in his life’s work. Gibbons’s work “was saying something that couldn’t be said in any other way, and it wasn’t saying it to the intellect.”

After more than a decade of learning his craft, and struggling under Gibbons’s large shadow, Esterly was tapped, in the aftermath of the devastating Hampton Court Palace fire of 1986 (and in the teeth of British xenophobia) to replace a destroyed Gibbons carving, a long pendant of flowers and leaves over a door in one of the king’s apartments. A quarter-century later, Esterly opened for the first time the journal he kept during the project and revisited one of the crucial years of his life. The result, The Lost Carving, is beautifully written and hauntingly evocative, a graceful meditation on art and craft, the singular life and achievements of Gibbons, and the ties that bind us to the past.

The year’s effort, filled with moments of intense frustration—as Esterly tried to work out how Gibbons had accomplished some of his greatest effects—and intense happiness when the work and the wood flowed in his hands, freed the carver from his long-dead mentor. The more Esterly plunged into the carving, the more Gibbons faded from it. “In the end there was no ghost to lay. Gibbons wasn’t the giant whose shoulder I was riding on. The giant was the act of carving, the making of anything.”