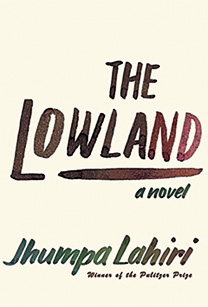 The book follows two brothers born in Calcutta just after India gained its independence in 1947. Subhash, the elder by a year, is quiet and cautious. Udayan, though younger, is more reckless and bold. Growing up, both brothers are excellent students. After finishing university, Subhash travels to Rhode Island to pursue a Ph.D. in biology. Udayan stays home, where he becomes a follower of the Maoist Naxalite movement, which fought for the violent overthrow of the Indian government beginning in the 1960s. After Udayan is arrested and killed by the police, Subhash returns home. He marries his brother’s young widow and takes her back to the United States, where he raises the child she was carrying as his own.

The Lowland is a book about complicated moral choices. It’s about the things we do for love, family and ourselves, and how hard it is sometimes to understand why we do things at all. Lahiri, who won the Pulitzer prize in 2000 for her short story collection The Interpreter of Maladies, has already been shortlisted for this year’s Booker prize for this book. No writer has ever won both a Pulitzer and a Booker. Don’t be surprised if Lahiri is the first. The Lowland is a significant achievement. It isn’t perfect. The writing at times is so effortless it feels cold. But it is very, very good. And Booker prize or no, by year’s end it will almost certainly be on many lists of the best books of 2013.